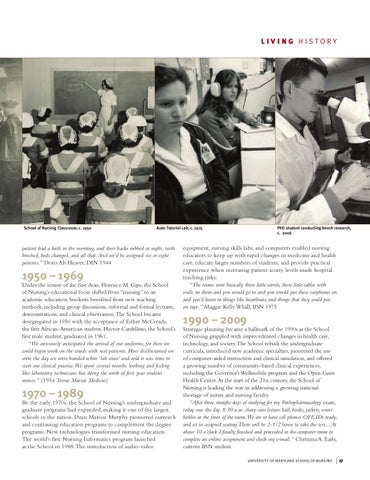 patient had a bath in the morning, and their backs rubbed at night, teeth brushed, beds changed, and all that. And we’d be assigned six or eight patients.” Doris Alt Heaver, DIN 1944

1950 – 1969 Under the tenure of the first dean, Florence M. Gipe, the School of Nursing’s educational focus shifted from “training” to an academic education. Students benefited from new teaching methods, including group discussions, informal and formal lectures, demonstrations, and clinical observation.The School became desegregated in 1950 with the acceptance of Esther McCready, the first African-American student. Hector Cardellino, the School’s first male student, graduated in 1961. “We anxiously anticipated the arrival of our uniforms, for then we could begin work on the wards with real patients. How disillusioned we were the day we were handed white ‘lab coats’ and told it was time to start our clinical practice.We spent several months looking and feeling like laboratory technicians but doing the work of first year student nurses.” (1954 Terrae Mariae Medicus)

1970 – 1989 By the early 1970s, the School of Nursing’s undergraduate and graduate programs had expanded, making it one of the largest schools in the nation. Dean Marion Murphy pioneered outreach and continuing education programs to complement the degree programs. New technologies transformed nursing education. The world’s first Nursing Informatics program launched at the School in 1988.The introduction of audio-video

equipment, nursing skills labs, and computers enabled nursing educators to keep up with rapid changes in medicine and health care, educate larger numbers of students, and provide practical experience when increasing patient acuity levels made hospital teaching risky. “The rooms were basically these little carrels, these little tables with walls on them and you would go in and you would put these earphones on and you’d listen to things like heartbeats, and things that they could put on tape.” Maggie Kelly Whall, BSN 1975

1990 – 2009 Strategic planning became a hallmark of the 1990s as the School of Nursing grappled with unprecedented changes in health care, technology, and society.The School rebuilt the undergraduate curricula, introduced new academic specialties, pioneered the use of computer-aided instruction and clinical simulation, and offered a growing number of community-based clinical experiences, including the Governor’s Wellmobile program and the Open Gates Health Center.At the start of the 21st century, the School of Nursing is leading the way in addressing a growing national shortage of nurses and nursing faculty. “After three straight days of studying for my Pathopharmacology exam, today was the day. 8:30 a.m. sharp into lecture hall; books, jackets, water bottles at the front of the room.We are to have cell phones OFF, IDs ready, and sit in assigned seating.There will be 2-1/2 hours to take the test…At about 10 o’clock I finally finished and proceeded to the computer room to complete an online assignment and check my e-mail.” Christina A. Early, current BSN student UNIVERSITY OF MARYLAND SCHOOL OF NURSING

The Magazine of the University of Maryland School of Nursing Spring 2009 Volume III, Issue I University of Maryland School of Nursing