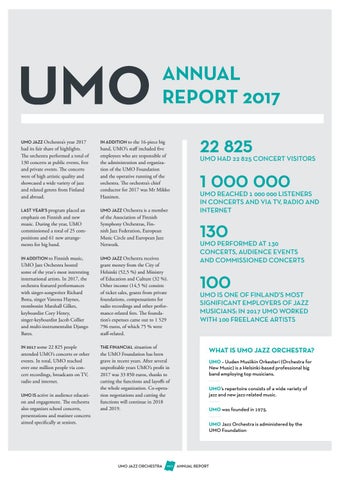 IN ADDITION to the 16-piece big

had its fair share of highlights. The orchestra performed a total of 130 concerts at public events, free and private events. The concerts were of high artistic quality and showcased a wide variety of jazz and related genres from Finland and abroad.

band, UMO’s staff included five employees who are responsible of the administration and organization of the UMO Foundation and the operative running of the orchestra. The orchestra’s chief conductor for 2017 was Mr Mikko Hassinen.

UMO JAZZ Orchestra is a member

emphasis on Finnish and new music. During the year, UMO commissioned a total of 25 compositions and 61 new arrangements for big band.

IN ADDITION to Finnish music,

grant money from the City of Helsinki (52,5 %) and Ministry of Education and Culture (32 %). Other income (14,5 %) consists of ticket sales, grants from private foundations, compensations for radio recordings and other performance-related fees. The foundation’s expenses came out to 1 529 796 euros, of which 75 % were staff-related.

THE FINANCIAL situation of

attended UMO’s concerts or other events. In total, UMO reached over one million people via concert recordings, broadcasts on TV, radio and internet.

UMO IS active in audience educati-

UMO REACHED 1 000 000 LISTENERS IN CONCERTS AND VIA TV, RADIO AND INTERNET

UMO IS ONE OF FINLAND’S MOST SIGNIFICANT EMPLOYERS OF JAZZ MUSICIANS: IN 2017 UMO WORKED WITH 100 FREELANCE ARTISTS