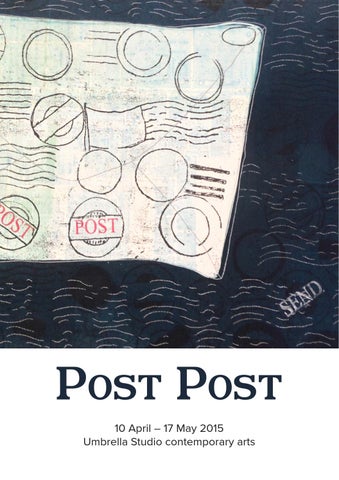 An exhibition curated by Donna Foley

Notes from the curator The

universal success of the postal industry is commonly attributed to the introduction of the adhesive postage stamp almost two centuries ago in the United Kingdom. Reform leading up to its introduction by British Member of Parliament, Rowland Hill, was a political agenda conceived to provide an efficient carrier service in order to stimulate commercial enterprise. One important reform included the regulated impost of one penny per ounce for all mail delivered. In 1839 James Chalmers, a Burgh Councillor and printer in Dundee Scotland took the first impressions of his proposed adhesive postage stamp on a Ruthven Press that was part of his printing business. Concurrent carrier services in other countries may have utilised a similar stamp or system. Arguably though, the worldâ&amp;#x20AC;&amp;#x2122;s first adhesive postage stamp was that introduced by Hill in 1840; the 19 x 22mm Penny Black, featuring the profile of Queen Victoria and the text ONE PENNY at its base. Superseded by the Penny Red, more than 68,000,000 prints of the Penny Black were produced in the first year in rows of 12 x 20, 240 stamps per sheet, before colour adjustments were made to more easily see the cancellation stamp. From these early sovereign themes, the designs and colours of postage stamps expanded exponentially to symbolize most aspects of culture, from history, the Arts and Scientific fields, to contemporary events, environment, sport, even the celebration of labour. The invention of the adhesive stamp cultivated intellectual and social life as the hand-written letter shifted beyond the typical genres of the instructional, commercial or informational to the personal. Just as the contemporary practices of emailing, texting, even sexting, define our lives, language and discourse, so too the customs of what we now refer to somewhat dismissively as â&amp;#x20AC;&amp;#x153;snail mailâ&amp;#x20AC;? provide insight into the massive shift in the practices, values and ideologies of our times. New industries were offshoots of postal commerce - to mention a few, transportation, paper production and major infrastructure in the form of post offices to facilitate operations and systems. Stamps became a viable financial staple as a means of exchange. One could settle a bill with the appropriate number of stamps. At the other end of the spectrum a more

recent commercial interest has developed in the form of real estate portfolios solely comprised of historic post offices. Interest in post-related culture developed rather quickly. Coined philately in 1864, the Greek derivation refers to an interest in, or fascination for, the exemption of taxes or duties. Over time, the practice extended to include a fascination for all things post. As advancing technologies and our communication modes over the past twenty or so years have dramatically transformed, artists in this exhibition reflect on how common themes in the designs of postage stamps have emerged over time, or alternatively, consider how extant processes and practices decline or evolve. Diana Orinda Burns (Post, Post Post and Post Poste, Postes), Kir Larwil (What could it be, Design Series and Pullotron 3000) , Megan Lewis (Post Print) and Jill O’Sullivan (Welsh Postings from a Roving Antipodean) adopt a nostalgic perspective of home and away, of the intimacy of letter writing, the wistfulness of the traveller and distance. Laura Castell (Townsville Ibis and Townsville Magpies) and Susan Baran (Plantlife of the Murray River) focus on flora and fauna in specific environments; others question how familiar images in theirs provoke disquiet. Endangered species is a pervasive theme in a number of artists’ work. Kerrie Cleverdon’s Aotearoa underscores extinct or endangered birds of New Zealand while Glenda Orr’s Bimblebox Mapping series allude to effects of mining the nature reserve, and Palestinian artist, Leena Nammari’s Falastine-Palestine document Kousour in the steep Ramallah and Beit Jala hills of the West Bank. These historic watch towers, still utilised today to store olives figs and other fruits during harvest, are target practice for adversarial Israelis. Less provocative perhaps are decontextualised images from art and culture presented by Nan Mulder (Mouths, Eyes) and this author (Sense of time, place, pride) for the viewer to make a connection or not. In any case, the innumerable images on the wall demand closer inspection and invite the viewer to engage in a practice fast disappearing from our culture.

“Frequent trips to Mildura in recent years and artist residencies at the wonderful Art Vault have given me time to explore the Murray River and collect plant samples that have resulted in a body of work based on the ‘Plantlife by the Murray River’ series. These prints/stamps are a miniature version of those works.”

Detail: Plantlife by the Murray River, Photopolymer intaglio and handcolouring, Edition of 10

is a Sydney based artist. She trained at the National Art School and did Post Graduate studies at City Art Institute (now COFA). Susan is a member of Warringah Printmakers Studio, and Sydney Printmakers and is currently president of both groups. She has had many exhibitions both solo and group shows throughout Australia and Internationally. Susan has work in collections like The Art Gallery of NSW, the National Gallery of Australia and Central Queensland University Art Collection and Artbank.

â&amp;#x20AC;&amp;#x153;Stamps often represent something of the locality where they are made and are part of the interaction between writer and reader. Ibises and magpies are both common birds in Townsville, the city in which I live, so I incorporated my experience of these birds in combination with a handmade approach to the project.â&amp;#x20AC;?

is originally from Venezuela and has lived in Australia for 24 years. She originally trained as a biologist however, she has recently become a full time artist. Her interests revolve around nature and social issues. Laura works in a variety of media with relief printmaking a strong focus in her work.

â&amp;#x20AC;&amp;#x153;Birds have been a popular subject for New Zealand stamps and yet, since human habitation, nearly half of our species have become extinct.â&amp;#x20AC;?

Detail: Aotearoa, Mezzotint on Fabriano Tiepolo paper, 50 stamps on each sheet, Edition of 20

is a New Zealand artist who has spent much of her working life as a graphic designer. She is now concentrating on print making to explore mythology and her New Zealand origins. She mainly uses the mezzotint process for its unique richness of tone and detail.

â&amp;#x20AC;&amp;#x153;Universal stamp themes from palaeontology to sovereignty to contemporary culture are explored in these works to reflect on what it is to be stereotypically Australian in a multi-cultural continent surrounded by Asia.â&amp;#x20AC;?

studied Visual Art at James Cook University Townsville graduating with a PhD in Creative Arts. Her work in traditional and digital printmaking explores communicative and sensorial responses in or to specific contexts. She teaches at TAFE Qld North, Pimlico Campus and her work is in public collections recently including Public Art in the sister city Changshu Artscape Project, China.

“There is something about an actual piece of paper that has been touched by the writer; travelled across country and sometimes sea and delivered into the hands of the receiver to be read and often reread. I recently found a box of carefully kept letters, written by my dad to mum, in the year before they were married. There are over 350 of them! I can’t see a bunch of emails ever having the same impact.”

Megan LEWIS was born, raised and educated in Newcastle, NSW.

She has travelled far and wide with extended stays in Scotland, Germany and Canada which provided interesting opportunities to make art, visit Print Workshops and eventually meet her husband, Geoff. Back in Newcastle Lewis balances raising a family, making lots of prints and working with special needs kids.

“A quiet and nostalgic look at the mail service the anticipation of letters, the mystery of an unknown package, and the commemorative role of stamps.”

is a printmaker and painter based in Castlemaine, Victoria. Most recently exhibited at Hatch Contemporary Art Space and Tacit Contemporary in Melbourne, Larwill’s work is represented in public and private collections including Counihan Gallery, State Library of Victoria, Print Council of Australia Archive and City of Freemantle.

“For years I have collected postcards from artworks of faces. This project gave me the opportunity to take details of these and make sheets of stamps of mouths, noses and eyes.”

born in Leiden, the Netherlands. She studied painting and printmaking at the Gerrit Rietveld Academie in Amsterdam (1967-’72) and the Art College of Kraków, Poland (1972-’73). She taught printmaking at Edinburgh College of Art and Dun Laoghaire School of Art and Design in Dublin. From 1977 till 2013 she lived and worked in Scotland. In October 2013 she moved back to the Netherlands.

“These structures are called “Kasir” in the singular, “Kousour” in the plural, which also translates as castle, or watch tower, which is also what they had been used for. The prices are old Palestinian currency, used during the British Mandate, now obsolete, with the creation of Israel and the occupation.”

“Notions of nostalgia, vulnerability and the lost art of handwritten letters is explored in the secret life of circuit boards, stamp marks and postage.”

is a professional printmaker whose works are held in major national and international art galleries. Passionate about printmaking and teaching, she has printed works for indigenous Western Desert artists, Archibald finalists and most recently for John Olsen.

“Dead branches of Yellowjackets (Corymbia leichhardtii) form beautiful patterns against the sky of the threatened Bimblebox Nature Refuge. This series extends the traditional flora and fauna stamps to celebrate the overlooked ‘dead’ habitat of our woodland plant communities.”

is a practicing artist primarily engaging with topical environmental issues. In 2007, Griffith University awarded her the University Medal and First Class Honours degree in Fine Arts. Subsequently, she has exhibited widely, nationally and internationally, tutored at the University, received over ten art awards and represented Queensland on the Print Council of Australia.

“Created originally in wood engravings at Aberystwyth, Wales, images for these stamps echo my imprinted memories of the time spent in a remarkable milieu.”

Jill O’SULLIVAN began her printmaking studies in Mount Isa which

led to a B.V.A major in printmaking at James Cook University, ultimately graduating with a PhD in Creative Arts. She has works held in international, National and State collections. Recently she had artist in residencies in Wales and China and presently prints and teaches in the studio space of Umbrella Studio, Townsville.

Print size in each edition is 38 x 56cm unless otherwise stated.

What could it be? (Parcel post) Collagraph with hand stamping on Somerset paper Series of 10 unique states $150 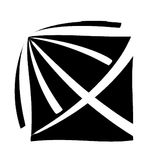