Uli Brahmst: On Being A Woman 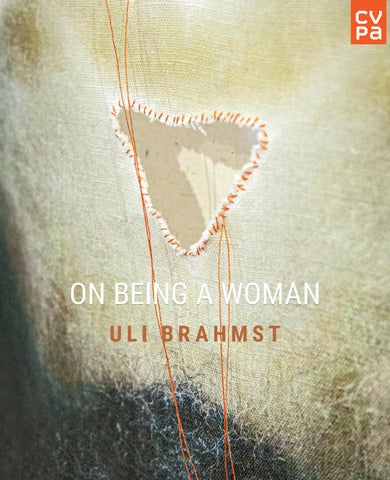 ON BEING A WOMAN ULI BRAHMST

Uli Brahmst: On Being A Woman German born artist Uli Brahmst presents a complex, visceral and evocative exhibition of drawings, prints, ﬁber art, and site-speciﬁc installation, all of which feature a powerful exploration of her life as a daughter, sister, mother, artist, partner, citizen, and emigrant. Four panels of vertical sheets of fabric at the entrance, titled Interface, carry printed images of screenshots taken from the artist’s computer with familiar icons on the bottom and the original German version of her name, Ulrike Brahmst, on the top. United by red tears hovering over the panels these prints show the artist’s work juxtaposed with everyday media images such as an abused woman, refugees, or those connected to the current impeachment proceedings. Brahmst’s strong drawing skills manifest themselves in various forms throughout the show, both on paper and fabric, small scale and also larger than life. The most intimate of these is a box of 12 pencil and pen drawings that we are invited to interact with, titled On Being A Woman. Their simple black lines transform into an intimate world that we happen to witness. These women are archetypes, cautious and strong, trying to ﬁnd their own voice, their own space, community and strength within this world. In the site speciﬁc installation, Sanctuary II, (branches, wool, watercolor on rice paper, chalk, clay, gold leaf, wood mounted inkjet prints) the knitted wool covering tree branches connects the natural and domestic in a metaphorical forest of memories, longing and/or be-longing. The branches are lining a river, represented by dusting blue pigment made from chalk as well as by the shimmer inside of ceramic bowls scattered around the ﬂoor. There are drawings of geese above the branches in this evocative environment, underlined by the interactive sounds of geese. It is as if they

were ﬂying over as do our primordial memories of the women in our life, who are able to create not only things out of yarn, but also to pass on stories in an atmosphere of intimacy and belonging. Uli, however, doesn’t stop in nostalgia. Escape to the quiet world of knitting is something she cannot do anymore. The images of displaced migrants, forest ﬁres, global warming and other intense imagery from today’s news appear between the branches as a reference to the unstoppable reality she has to strive to mend.

Curiosity and the quest to articulate my observations, and queries drive my work. On Being A Woman is a subjective exploration of being a daughter, sister, mother, artist, partner, citizen, emigrant… I am inspired as much by my own life as by the stories and impressions I observe in the world around me. They draw me into the complexity of the human predicament. As an artist, it is my experience, that the real and the surreal live surprisingly close together and are frequently intertwined. Consequently, my work ﬂows freely between the two. Imagination transforms the mundane and the moralistic into something mysterious, breathes life into the ordinary and stretches the parameters of commonplace reality allowing new and uncommon images to enter. In this space, vision can enfold and empower us to move from cognitive conﬁnement to a deeper understanding of humanity. I set out to create an intuitive reality evocative of the feminine domestic domain. In the process, I became intrigued by the meditative potential of handwork and was increasingly drawn to such traditional practices as sewing, felting, knitting, and weaving which provide a sense of refuge as well as care in a fast paced, turbulent world.

On Being A Woman Drawing is essential to my creative expression. I draw to think, to process, to search for what underlies the obvious. I set out with a simple mark on paper and follow the line as an observer. Over the past couple of years, more often than not, images of women have emerged between my lines. Women of all ages and backgrounds, with and without children. Strong women, broken women, broken and strong women. I started drawing them in the fall of 2017, when the usage of the word misogyny had been spiking, and the Me Too movement was taking hold. As a woman raising a teenage girl, I have a natural affinity with the lives of other women. I read their stories, hear them on the radio, watch them on tv, meet them, know them as friends or family. They intrigue me, hold my attention and urge me to understand their humanity. Together, these drawings speak about the complexity of femininity and what it means to me to be a woman.

Shame Shame is a learned, externally imposed feeling that can erode and even devour any sense of inner value and self-appreciation. Shaming is an act that results from the desire to diminish another being by creating a repulsive image in the hope that it will grow and destroy. While there are endless platforms for shaming, in the current public discourse it appears to me that Twitter has become a popular fuel for the ďŹ re of this destructive exploitation of human vulnerability.

Sanctuary Sanctuaries collapse past and future into the presence of heightened awareness as they request that we melt our armor to inhale strength; they shelter while demanding our surrender to a world far beyond our horizons; they are ﬁlled with echoes forming a cacophony of sounds allowing us to expand into stillness. The work features the interception of nature and creative exploration. Growing up at the river’s edge across a large forest, digging for clay in the ground, the air ﬁlled with the sounds of birds, nature became my ﬁrst conscious spiritual refuge that helped my mind to calm, let go and expand. At the same time, I was nurtured and restored in my mother’s presence as she sat for long hours with yarn running through her ﬁngers creating magical garments while ﬁlling the air with comfort, beauty, and care. Initially, I exhibited a smaller version of this installation without the images of news ﬂashes. While working on the expansion of this piece I found it increasingly difficult to ﬁnd silence and sanctuary while fully aware that millions of people are being displaced losing their sanctuaries due to a myriad of social, political and environmental reasons. My desire for sanctuary started to stand on precarious ground: how much do I need to withdraw in order to refuel and when does retreat turn into avoidance and ignorance?

Domestic Thread Domestic Thread is a series of ďŹ ber collages revolving around the more or less subtle undermining of female wholeness in the domestic sphere. The home is commonly tended by women and is meant to provide comfort and shelter. Paradoxically, the home is also the most common venue for violence against women, whether in the form of micro-aggressions curtailing female power and conďŹ dence, or in outright manifestations of assault, abuse, and violence, frequently using sexual objectiďŹ cation as a driving force. Appearances tend to be maintained so that the breakdown of female mental, physical as well as spiritual health and integrity enfolds behind inconspicuous facades. Domestic Thread: Trophies, archival ultra-chrome print on linen, crochet, embroidered tea dyed muslin, assorted fabrics, thread, 2019

Sage Evolved through the lyrics of time the sage ventures on under the guidance of imagination.

Beyond Facades Propelled by vision the spirit reaches beyond the shadows of placid facades.

Heirloom We are living in a world where group identiďŹ cation and the concept of tribalism are guiding forces in the socio-political discourse, whether we are identifying the other or ourselves. Yale law professor and writer Amy Chua argues that tribalism essentially describes the human instinct to want to belong to a group of people who are like us. Paradoxically, group identity is just as easily viliďŹ ed as it is romanticized. Heirloom challenges the merit of nostalgic attachments and offers imagination as a liberating alternative that enables us to shift focus and experience ourselves and the world we live in anew.

Interiors Interiors illuminate the mundane, generic elements of our daily domestic routines and juxtaposes them with the extraordinary that unfolds in the privacy of our individual psyche. A sense of claustrophobic commonplace smallness gets deconstructed by the ingenuity of the sublime. Interiors, archival ultra-chrome print on cotton poplin, linen, thread, 2019

Interiors Interiors illuminate the mundane, generic elements of our daily domestic routines and juxtaposes them with the extraordinary that unfolds in the privacy of our individual psyche. A sense of claustrophobic commonplace smallness gets deconstructed by the ingenuity of the sublime. Interiors, archival ultra-chrome print on cotton poplin, linen, thread, 2019

Interface Interface brings together images that collide on my screens during the course of any given day and speak to the complexity of life in the digital age. The perforated boundaries between the private and the public seem to open the ďŹ&amp;#x201A;ood gates for information which as a society we struggle to ďŹ lter and navigate. For this work, I am using my computer screen as substrata on whic I juxtapose loosely connected, ambiguous realities that question the romanticized authority assigned to information ďŹ&amp;#x201A;ooding our various screens.

Uli Brahmst: On Being A Woman

An exhibition of the work Uli Brahmst: On Being A Woman. Curated by Viera Levitt. University Art Gallery, January 21 - March 12, 2020. 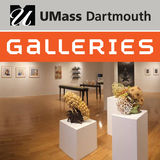