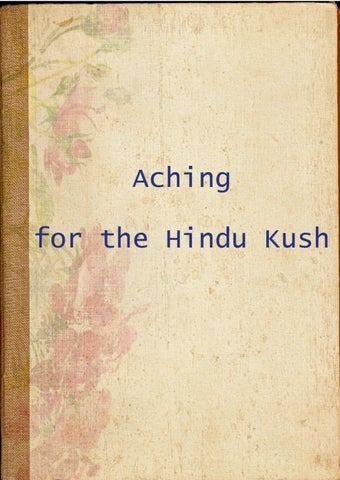 Aching for the Hindu Kush

Babur in Farghana The clear air crackles over the steppe, trembles blue of a pool where breast of bird skims the surface like a sigh. His tunic is splattered with mud, ropes of hair fall on eyes turbid like dark lake, nomadic blood runs like streams that crisscross the land his ancestors essayed. Turban laced with sapphires cradles rinds of melons from Farghana country. He reads the horizon as he would a poem, counts the rolls of hills fading purple at distance; considers heâ&#x20AC;&#x2122;ll pitch his kingdom where blue gets ashen grey.

Babur in Samarkand Breeze from the hills blows between walls of mausoleum, ascends on ribs of blue domed prayers to wrap him in muteness. The city carries memories of watercourses that like veins rumble and knot close to the heart of the land. Gardens are young maidens that open their blouse, bare pomegranates - a rash of desire smears an ache that like a needle pricks him. He lays her on the cool mosaic of his colonnade, the cool stone breathing through the pores in her neck wrapped in a turquoise band. City pants in tumescence with sharp cries of battle, the young emperor is the dervish spirited by his passion for the land.

Babur in Kabul The northern wind from the Hindu Kush set the talisman tied to the doors jangle, prayers of souls drowned the lake, greened the meadow. Dead skin from wintry nights

in the cold desert fell away like vermins in the warm embrace of smoked rhubarb that filled the air of the hill country, blue with traces of silver and lapis lazuli.

Fields stained red with madder roots spread like shawl of heavens at his feet, but he sought echoes of different nights, visions of lands that entombed lost legacies.

Flowers of Jade on her Tomb I am inspired for a sweetened coffee, the cup engraved in moss colored flowers from the tomb of Mumtaz Mahal. Breath hangs like whisper in the silence of the vault, pollen of thickly scented spider lily falls like the rustle of her tussar silk. It becomes cumbersome to remove layers of pearl every night, women whisper in the corners of the palace that he takes her when she fills with eggs. Itâ&#x20AC;&#x2122;s easy to spoil coffee in the full view of the marble building, the moon curdles into milk like cancerous scars from fumes, loss and pain. Sweat from the palm leaves salt, etchings of flowers cloud like the muddied river as froth of coffee gently bursts raining coolness. Aching For The Hindu Kush

Aching For The Hindu Kush