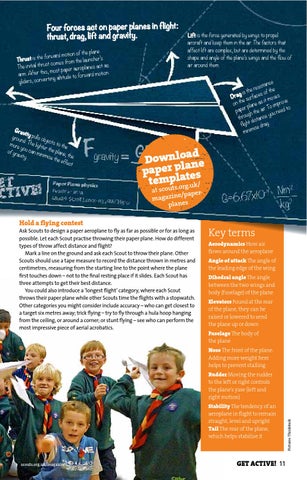 Lift aircraft and keep them in the air. The factors that

Get Scouts to make and decorate their own paper aeroplanes. Provide plans for a few different designs and introduce some simple aerodynamic ideas for Scouts to think about.

pulls . The objects t o lighte r the the plane , the

Ask Scouts to design a paper aeroplane to fly as far as possible or for as long as possible. Let each Scout practise throwing their paper plane. How do different types of throw affect distance and flight? Mark a line on the ground and ask each Scout to throw their plane. Other Scouts should use a tape measure to record the distance thrown in metres and centimetres, measuring from the starting line to the point where the plane first touches down – not to the final resting place if it slides. Each Scout has three attempts to get their best distance. You could also introduce a ‘longest flight’ category, where each Scout throws their paper plane while other Scouts time the flights with a stopwatch. Other categories you might consider include accuracy – who can get closest to a target six metres away; trick flying – try to fly through a hula hoop hanging from the ceiling, or around a corner; or stunt flying – see who can perform the most impressive piece of aerial acrobatics.

Key terms Aerodynamics How air flows around the aeroplane Angle of attack The angle of the leading edge of the wing Dihedral angle The angle between the two wings and body (fuselage) of the plane Elevators Found at the rear of the plane, they can be raised or lowered to send the plane up or down Fuselage The body of the plane Nose The front of the plane. Adding more weight here helps to prevent stalling

Stability The tendency of an aeroplane in flight to remain straight, level and upright Tail The rear of the plane, which helps stabilise it

Get Active! February/March 2014 - the practical skills supplement to Scouting magazine. 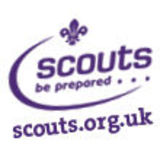