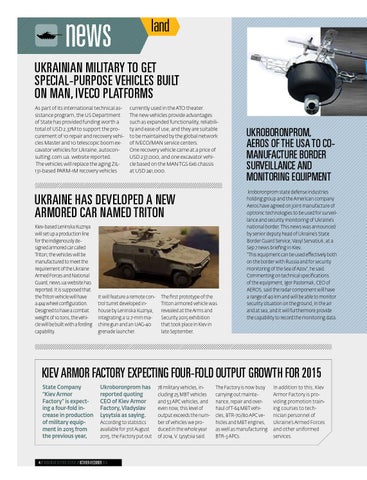 Ukrainian Military to Get Special-Purpose Vehicles Built on MAN, IVECO Platforms As part of its international technical assistance program, the US Department of State has provided funding worth a total of USD 2.37M to support the procurement of 10 repair and recovery vehicles Master and 10 telescopic boom excavator vehicles for Ukraine, autoconsulting.com.ua. website reported. The vehicles will replace the aging ZIL131-based PARM-1M recovery vehicles

currently used in the ATO theater. The new vehicles provide advantages such as expanded functionality, reliability and ease of use, and they are suitable to be maintained by the global network of IVECO/MAN service centers. One recovery vehicle came at a price of USD 237,000, and one excavator vehicle based on the MAN TGS 6x6 chassis at USD 241,000.

Ukraine has Developed a New Armored Car Named Triton Kiev-based Leninska Kuznya will set up a production line for the indigenously designed armored car called Triton; the vehicles will be manufactured to meet the requirement of the Ukraine Armed Forces and National Guard, news.ua website has reported. It is supposed that the Triton vehicle will have a 4x4 wheel configuration. Designed to have a combat weight of 10 tons, the vehicle will be built with a fording capability.

It will feature a remote control turret developed inhouse by Leninska Kuznya, integrating a 12.7-mm machine gun and an UAG-40 grenade launcher.

The first prototype of the Triton armored vehicle was revealed at the Arms and Security 2015 exhibition that took place in Kiev in late September.

Ukroboronprom, Aeros of the USA to CoManufacture Border Surveillance and Monitoring Equipment

kroboronprom state defense industries holding group and the American company Aeros have agreed on joint manufacture of optronic technologies to be used for surveillance and security monitoring of Ukraine’s national border. This news was announced by senior deputy head of Ukraine’s State Border Guard Service, Vasyl Servatiuk, at a Sep 7 news briefing in Kiev. “This equipment can be used effectively both on the border with Russia and for security monitoring of the Sea of Azov”, he said. Commenting on technical specifications of the equipment, Igor Pasternak, CEO of AEROS, said the radar component will have a range of 40 km and will be able to monitor security situation on the ground, in the air and at sea, and it will furthermore provide the capability to record the monitoring data.

According to statistics available for 31st August 2015, the Factory put out

78 military vehicles, including 25 MBT vehicles and 53 APC vehicles, and even now, this level of output exceeds the number of vehicles we produced in the whole year of 2014, V. Lysytsia said.

In addition to this, Kiev Armor Factory is providing promotion training courses to technician personnel of Ukraine’s Armed Forces and other uniformed services.

Ukrainian Defense Review is the Ukrainian magazine published by Defense Express (Media&Consulting Company). It contains News and Analysis on issues of defense industry and arms trade of Ukraine and the World trends. It is issued once a quarter in English and distributed free of charge around the World. 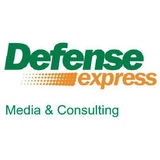