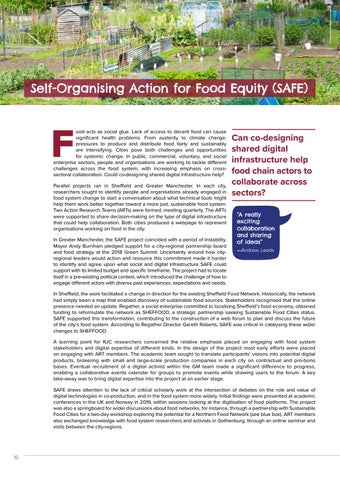 ood acts as social glue. Lack of access to decent food can cause significant health problems. From austerity to climate change, pressures to produce and distribute food fairly and sustainably are intensifying. Cities pose both challenges and opportunities for systemic change. In public, commercial, voluntary, and social enterprise sectors, people and organisations are working to tackle different challenges across the food system, with increasing emphasis on crosssectoral collaboration. Could co-designing shared digital infrastructure help? Parallel projects ran in Sheffield and Greater Manchester. In each city, researchers sought to identify people and organisations already engaged in food system change to start a conversation about what technical tools might help them work better together toward a more just, sustainable food system. Two Action Research Teams (ARTs) were formed, meeting quarterly. The ARTs were supported to share decision-making on the type of digital infrastructure that could help collaboration. Both cities produced a webpage to represent organisations working on food in the city. In Greater Manchester, the SAFE project coincided with a period of instability. Mayor Andy Burnham pledged support for a city-regional partnership board and food strategy at the 2018 Green Summit. Uncertainty around how cityregional leaders would action and resource this commitment made it harder to identify and agree upon what social and digital infrastructure SAFE could support with its limited budget and specific timeframe. The project had to locate itself in a pre-existing political context, which introduced the challenge of how to engage different actors with diverse past experiences, expectations and needs.

In Sheffield, the work facilitated a change in direction for the existing Sheffield Food Network. Historically, the network had simply been a map that enabled discovery of sustainable food sources. Stakeholders recognised that the online presence needed an update. Regather, a social enterprise committed to localising Sheffield’s food economy, obtained funding to reformulate the network as SHEFFOOD, a strategic partnership seeking Sustainable Food Cities status. SAFE supported this transformation, contributing to the construction of a web forum to plan and discuss the future of the city’s food system. According to Regather Director Gareth Roberts, SAFE was critical in catalysing these wider changes to SHEFFOOD. A learning point for RJC researchers concerned the relative emphasis placed on engaging with food system stakeholders and digital expertise of different kinds. In the design of the project most early efforts were placed on engaging with ART members. The academic team sought to translate participants’ visions into potential digital products, brokering with small and large-scale production companies in each city on contractual and pro-bono bases. Eventual recruitment of a digital activist within the GM team made a significant difference to progress, enabling a collaborative events calendar for groups to promote events while drawing users to the forum. A key take-away was to bring digital expertise into the project at an earlier stage. SAFE draws attention to the lack of critical scholarly work at the intersection of debates on the role and value of digital technologies in co-production, and in the food system more widely. Initial findings were presented at academic conferences in the UK and Norway in 2019, within sessions looking at the digitisation of food platforms. The project was also a springboard for wider discussions about food networks, for instance, through a partnership with Sustainable Food Cities for a two-day workshop exploring the potential for a Northern Food Network (see blue box). ART members also exchanged knowledge with food system researchers and activists in Gothenburg, through an online seminar and visits between the city-regions.

In search of alternatives, spaces for hope and progressive urban futures, how can academics work in partnership to move beyond critique and realise more just cities? - By working with residents, activists and community groups - By exploring municipal co-production - By transforming practices, processes and sites of knowledge production This report showcases work undertaken by the Realising Just Cities UK partnership, hosted by the Urban Institute with colleagues in the Faculty of Social Sciences, University of Sheffield 2016–2019.