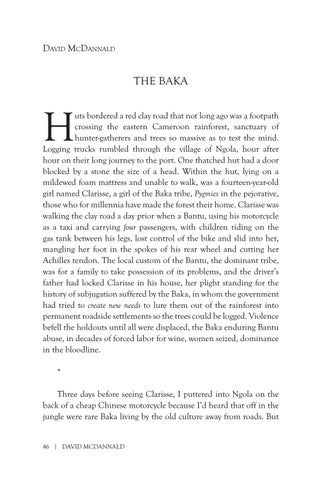 uts bordered a red clay road that not long ago was a footpath crossing the eastern Cameroon rainforest, sanctuary of hunter-gatherers and trees so massive as to test the mind. Logging trucks rumbled through the village of Ngola, hour after hour on their long journey to the port. One thatched hut had a door blocked by a stone the size of a head. Within the hut, lying on a mildewed foam mattress and unable to walk, was a fourteen-year-old girl named Clarisse, a girl of the Baka tribe, Pygmies in the pejorative, those who for millennia have made the forest their home. Clarisse was walking the clay road a day prior when a Bantu, using his motorcycle as a taxi and carrying four passengers, with children riding on the gas tank between his legs, lost control of the bike and slid into her, mangling her foot in the spokes of his rear wheel and cutting her Achilles tendon. The local custom of the Bantu, the dominant tribe, was for a family to take possession of its problems, and the driverâ&#x20AC;&#x2122;s father had locked Clarisse in his house, her plight standing for the history of subjugation suffered by the Baka, in whom the government had tried to create new needs to lure them out of the rainforest into permanent roadside settlements so the trees could be logged. Violence befell the holdouts until all were displaced, the Baka enduring Bantu abuse, in decades of forced labor for wine, women seized, dominance in the bloodline. * Three days before seeing Clarisse, I puttered into Ngola on the back of a cheap Chinese motorcycle because Iâ&#x20AC;&#x2122;d heard that off in the jungle were rare Baka living by the old culture away from roads. But 46 | DAVID MCDANNALD