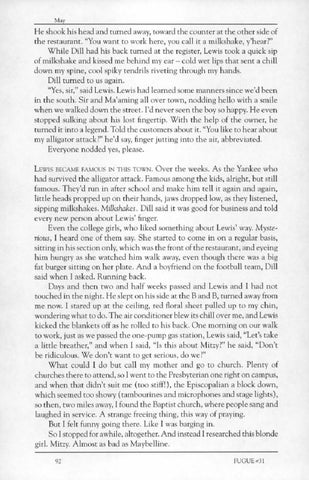 He shook his head and turned away, toward the counter at the other side of the restaurant. "You want to work here, you call it a milkshake, y'hear?" While Dill had his back turned at the register, Lewis took a quick sip of milkshake and kissed me behind my ear- cold wet lips that sent a chill down my spine, cool spiky tendrils riveting through my hands. Dill turned to us again. "Yes, sir," said Lewis. Lewis had learned some manners since we'd been in the south. Sir and Ma'aming all over town, nodding hello with a smile when we walked down the street. I'd never seen the boy so happy. He even stopped sulking about his lost fingertip. With the help of the owner, he turned it into a legend. Told the customers about it. "You like to hear about my alligator attack?" he'd say, finger jutting into the air, abbreviated. Everyone nodded yes, please. LEWIS BECAME FAMOUS IN THIS TOWN. Over the weeks. As the Yankee who had survived the alligator attack. Famous among the kids, alright, but still famous. They'd run in after school and make him tell it again and again, little heads propped up on their hands, jaws dropped low, as they listened, sipping milkshakes. Milkshakes. Dill said it was good for business and told every new person about Lewis' finger. Even the college girls, who liked something about Lewis' way. Myste, rious, I heard one of them say. She started to come in on a regular basis, sitting in his section only, which was the front of the restaurant, and eyeing him hungry as she watched him walk away, even though there was a big fat burger sitting on her plate. And a boyfriend on the football team, Dill said when I asked. Running back. Days and then two and half weeks passed and Lewis and I had not touched in the night. He slept on his side at the Band B, turned away from me now. I stared up at the ceiling, red floral sheet pulled up to my chin, wondering what to do. The air conditioner blew its chill over me, and Lewis kicked the blankets off as he rolled to his back. One morning on our walk to work, just as we passed the one,pump gas station, Lewis said, "Let's take a little breather," and when I said, "Is this about Mitzy?" he said, "Don't be ridiculous. We don't want to get serious, do we?" What could I do but call my mother and go to church. Plenty of churches there to attend, so I went to the Presbyterian one right on campus, and when that didn't suit me (too stiff!), the Episcopalian a block down, which seemed too showy (tambourines and microphones and stage lights), so then, two miles away, I found the Baptist church, where people sang and laughed in service. A strange freeing thing, this way of praying. But I felt funny going there. Like I was barging in. So I stopped for awhile, altogether. And instead I researched this blonde girl. Mitzy. Almost as bad as Maybelline. 92