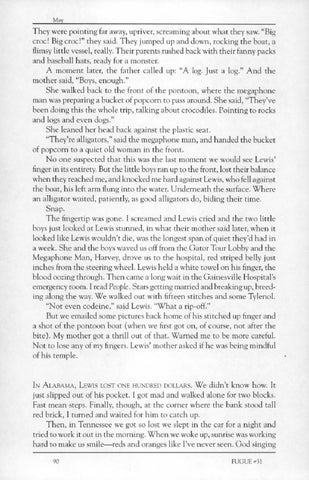 They were pointing far away, upriver, screaming about what they saw. "Big croc! Big croc!" they said. They jumped up and down, rocking the boat, a flimsy little vessel, really. Their parents rushed back with their fanny packs and baseball hats, ready for a monster. A moment later, the father called up: "A log. Just a log." And the mother said, "Boys, enough." She walked back to the front of the pontoon, where the megaphone man was preparing a bucket of popcorn to pass around. She said, "They've been doing this the whole trip, talking about crocodiles. Pointing to rocks and logs and even dogs." She leaned her head back against the plastic seat. "They're alligators," said the megaphone man, and handed the bucket of popcorn to a quiet old woman in the front. No one suspected that this was the last moment we would see Lewis' finger in its entirety. But the little boys ran up to the front, lost their balance when they reached me, and knocked me hard against Lewis, who fell against the boat, his left arm flung into the water. Underneath the surface. Where an alligator waited, patiently, as good alligators do, biding their time. Snap. The fingertip was gone. I screamed and Lewis cried and the two little boys just looked at Lewis stunned, in what their mother said later, when it looked like Lewis wouldn't die, was the longest span of quiet they'd had in a week. She and the boys waved us off from the Gator Tour Lobby and the Megaphone Man, Harvey, drove us to the hospital, red striped belly just inches from the steering wheel. Lewis held a white towel on his finger, the blood oozing through. Then came a long wait in the Gainesville Hospital's emergency room. I read People. Stars getting married and breaking up, breeding along the way. We walked out with fifteen stitches and some Tylenol. "Not even codeine," said Lewis. "What a rip-off." But we emailed some pictures back home of his stitched up finger and a shot of the pontoon boat (when we first got on, of course, not after the bite). My mother got a thrill out of that. Warned me to be more careful. Not to lose any of my fingers. Lewis' mother asked if he was being mindful of his temple.

IN ALABAMA, LEWIS LOST ONE HUNDRED DOLLARS. We didn't know how. It just slipped out of his pocket. I got mad and walked alone for two blocks. Fast mean steps. Finally, though, at the corner where the bank stood tall red brick, I turned and waited for him to catch up. Then, in Tennessee we got so lost we slept in the car for a night and tried to work it out in the morning. When we woke up, sunrise was working hard to make us smile-reds and oranges like I've never seen. God singing 90