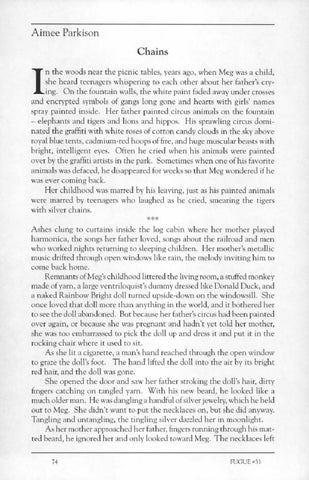 n the woods near the picnic tables, years ago, when Meg was a child, she heard teenagers whispering to each other about her father's crying. On the fountain walls, the white paint faded away under crosses and encrypted symbols of gangs long gone and hearts with girls' names spray painted inside. Her father painted circus animals on the fountain -elephants and tigers and lions and hippos. His sprawling circus dominated the graffiti with white roses of cotton candy clouds in the sky above royal blue tents, cadmium-red hoops of fire, and huge muscular beasts with bright, intelligent eyes. Often he cried when his animals were painted over by the graffiti artists in the park. Sometimes when one of his favorite animals was defaced, he disappeared for weeks so that Meg wondered if he was ever coming back. Her childhood was marred by his leaving, just as his painted animals were marred by teenagers who laughed as he cried, smearing the tigers with silver chains.

Ashes clung to curtains inside the log cabin where her mother played harmonica, the songs her father loved, songs about the railroad and men who worked nights returning to sleeping children. Her mother's metallic music drifted through open windows like rain, the melody inviting him to come back home. Remnants of Meg's childhood littered the living room, a stuffed monkey made of yam, a large ventriloquist's dummy dressed like Donald Duck, and a naked Rainbow Bright doll turned upside-down on the windowsill. She once loved that doll more than anything in the world, and it bothered her to see the doll abandoned. But because her father's circus had been painted over again, or because she was pregnant and hadn't yet told her mother, she was too embarrassed to pick the doll up and dress it and put it in the rocking chair where it used to sit. As she lit a cigarette, a man's hand reached through the open window to graze the doll's foot. The hand lifted the doll into the air by its bright red hair, and the doll was gone. She opened the door and saw her father stroking the doll's hair, dirty fingers catching on tangled yarn. With his new beard, he looked like a much older man. He was dangling a handful of silver jewelry, which he held out to Meg. She didn't want to put the necklaces on, but she did anyway. Tangling and untangling, the tingling silver dazzled her in moonlight. As her mother approached her father, fingers running through his matted beard, he ignored her and only looked toward Meg. The necklaces left 74