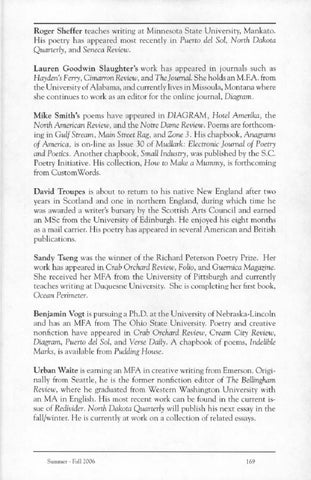 Roger Sheffer teaches writing at Minnesota State University, Mankato. His poetry has appeared most recently in Puerto del Sol, North Dakota Quarterly, and Seneca Review. Lauren G oodwin Slaughter 's work has appeared in journals such as Hayden's Ferry, Cimarron Review, and The Journal. She holds an M.FA. from the University of Alabama, and currently lives in Missoula, Montana where she continues to work as an editor for the online journal, Diagram. Mike Smith's poems have appeared in DIAGRAM, Hotel Amerika, the North American Review, and the Notre Dame Review. Poems are forthcoming in Gulf Stream, Main Street Rag, and Zone 3. His chapbook, Anagrams of America, is on-line as Issue 30 of Mudlark: Electronic Journal of Poetry and Poetics. Another chapbook, Small Industry, was published by the S.C. Poetry Initiative. His collection, How to Make a Mummy, is forthcoming from CustomWords. David Troupes is about to return to his native New England after two years in Scotland and one in northern England, during which time he was awarded a writer's bursary by the Scottish Arts Council and earned an MSc from the University of Edinburgh. He enjoyed his eight months as a mail carrier. His poetry has appeared in several American and British publications. Sandy Tseng was the winner of the Richard Peterson Poetry Prize. Her work has appeared in Crab Orchard Review, Folio, and Guemica Magazine. She received her MFA from the University of Pittsburgh and currently teaches writing at Duquesne University. She is completing her first book,

Ocean Perimeter. Benjamin Vogt is pursuing a Ph.D. at the University of Nebraska-Lincoln and has an MFA from The Ohio State University. Poetry and creative nonfiction have appeared in Crab Orchard Review, Cream City Review, Diagram, Puerto del Sol, and Verse Daily. A chapbook of poems, Indelible Marks, is available from Pudding House. Urban Waite is earning an MFA in creative writing from Emerson. Originally from Seattle, he is the former nonfiction editor of The Bel.lingham Review, where he graduated from Western Washington University with an MAin English. His most recent work can be found in the current issue of Redivider. North Dakota Quarterly will publish his next essay in the fa ll/winter. He is currently at work on a collection of related essays.