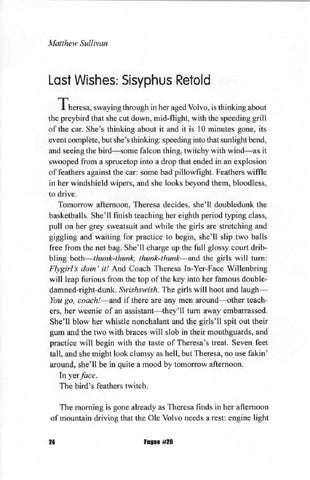 Last Wishes: Sisyphus Retold Theresa, swaying through in her aged Volvo, is thinking about the preybird that she cut down, mid-flight, with the speeding gri ll of the car. She&#39;s thinking about it and it is 10 minutes gone, its event complete, but she&#39;s thinking: speeding into that sunlight bend, and seeing the bird- some falcon thing, twitchy with wind-as it swooped from a sprucetop into a drop that ended in an explosion of feathers against the car: some bad pillowfight. Feathers wiffle in her windshield wipers, and she looks beyond them, bloodless, to drive. Tomorrow afternoon, Theresa decides, she&#39; ll doubledunk the basketballs. She&#39; ll fmish teaching her eighth period typing class, pull on her grey sweatsuit and while the girls are stretching and giggling and waiting for practice to begin, she&#39; ll slip two balls free from the net bag. She&#39;ll charge up the fu ll glossy court dribbling both- thunk-thunk, thunk-thunk- and the girls w ill tum: Flygirl&#39;s doin&#39; it! And Coach Theresa In-Yer-Face Willenbring will leap furious from the top of the key into her famous doubledamned-right-dunk. Swishswish. The girls wi ll hoot and laughYou go, coach!-and if there are any men around-other teachers, her weenie of an assistant- they&#39; ll tum away embarrassed. She&#39; ll blow her whistle nonchalant and the girls&#39; ll spit out their gum and the two with braces will slob in their mouthguards, and practice will begin with the taste of Theresa&#39;s treat. Seven feet tall, and she might look clumsy as hell, but Theresa, no use fakin &#39; around, she&#39; ll be in quite a mood by tomorrow afternoon. In yerface. The bird&#39;s feathers twitch. The morning is gone already as Theresa finds in her afternoon of mountain driving that the Ole Volvo needs a rest: engine light hill # 21 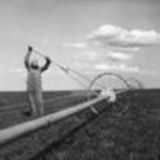