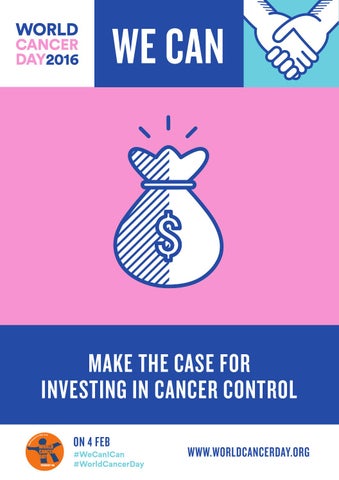 MAKE THE CASE FOR INVESTING IN CANCER CONTROL ca

MAKE THE CASE FOR INVESTING IN CANCER CONTROL

The economic case for investment is becoming a vital piece of the jigsaw to change mind-sets around the value of investing in cancer prevention and control1. There is already a compelling argument for investing in prevention of cancer rather than dealing with the consequences. A case in point is tobacco control. While the annual economic costs of tobacco-attributable cancers exceed USD 200 billion, for the average low- and middle- income country (LMIC), the amount necessary to deliver the four “best buy” tobacco control measures is approximately USD 0.11 per capita2,3. The four measures include: tobacco tax increases, smoke-free policies, package warnings, and advertising bans.

The cancer community is now drawing on its networks of experts to build the global evidence base on the economic costs and the return on investment (ROI) in taking on other proven strategies for cancer prevention, early detection and health systems strengthening. This includes the case for investment in radiotherapy, an essential tool in the cure and palliation of cancer that is indicated in more than half of new cancer patients6. The Global Task Force on Radiotherapy for Cancer Control (GTFRCC) has convened radiotherapy professionals, industry partners, cancer leaders, global health experts, economists, and enablers of healthcare change, to quantify the investment needed to provide equitable access to radiation therapy worldwide7.

Of these four measures, increasing excise taxes on tobacco products is widely accepted as one of the most effective and affordable tobacco control intervention4. The World Health Organization (WHO) estimates that raising tobacco taxes costs as little as USD 0.005 per person per year and can save millions of lives4. Additionally, it has been shown that raising tobacco taxes does not lead to a fall in government revenues – evidence suggests that if countries increased tobacco tax by 50% per pack, governments around the world would earn an extra USD 101 billion in revenue5.

BUILDING THE ECONOMIC CASE FOR INVESTMENT IN CANCER CAN CHANGE MIND-SETS AND ALLOW GOVERNMENTS TO JUSTIFY PLACING CANCER CONTROL AT THE HEART OF THEIR NATIONAL HEALTH PLANS.

The fact sheets provide a general overview of the key issues and areas of focus that are highlighted in the 2016 campaign. 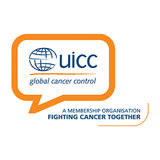