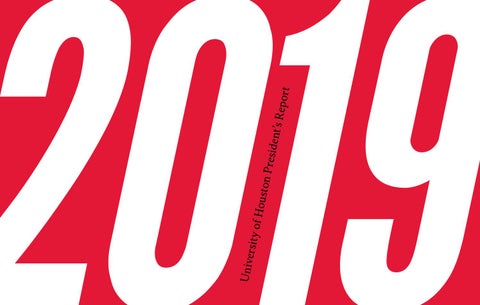 Our story is not the story of the past, but of the present, and how our present leads into the future. This report presents the yearâ&#x20AC;&#x2122;s highlights in the form of stories of momentum.

The University of Houston encourages all its students to reach for the stars. But, for some, the moon is more than enough. Monica Martinez, a mechanical engineering major, was routinely studying the properties of lunar dust brought back by Apollo 17 astronauts when she discovered something … different. Her results included calcium sulfide — a compound that had not been listed among the officially identified and oft-analyzed moon materials. Her startling find was confirmed and Martinez has become another shining reminder of the many paths that can be taken to student success. In her case, the El Salvadoran native was a transfer to UH from Houston Community College. In fact, more than 4,600 students from two- and fouryear institutions transferred to UH last year, serving as a vital but not always recognized component — not unlike calcium sulfide on the moon.

With the precision of a surgeon wielding a scalpel, Governor Greg Abbott signed the document with a flourish, officially turning the University of Houston’s concept of a medical school into a reality. The state’s top politico came to campus to participate in a ceremonial bill signing of HB826 and unveiling of the cutting-edge, $80 million building that will house the College of Medicine on a 43-acre site adjacent to campus. The mission is to address a startling shortage of primary care physicians in urban and rural areas of the state by providing well-trained champions of preventive care. Following approval by the LCME, UH will begin preparing its inaugural class of 30 students in 2020 — a class whose tuition has been fully paid for by an anonymous donor. UH has long had strong programs in the biomedical sciences, Tier One research in the health-related fields and a proud tradition of clinical outreach to the community. The medical school is the latest addition to that legacy.

Passing Rates for Nursing Programs in the Nation

Giving It Your All

Surpassing the original $1 billion goal 18 months ahead of schedule in the University’s “Here, We Go” Campaign illustrates what happens when a community comes together for the greater good. The contagious nature of the campaign has inspired many to step forward as agents of transformation. Through one anonymous donor’s notable commitment, the University launched Aspire Fund: The $50 Million Challenge to establish transformative institutes, attract premier faculty and prepare our students to engage on a global scale. A landmark gift to support construction of a new state-of-the-art facility to be named the John M. O’Quinn Law Building will help usher in a new era in 21st century legal education. And the Cyvia and Melvyn Wolff Center for Entrepreneurship received a historic donation from the Cyvia and Melvyn Wolff Family Foundation to continue its momentum as a leader in entrepreneurial education and opportunities. While the campaign officially concludes in August 2020, the need for philanthropic support will continue as we continue to educate today’s students for tomorrow’s success.

What if concrete could talk?

A bridge or a building would be able to warn us if its structure was starting to fail. At UH, that rather fanciful view of concrete has become a hard fact. Sensytec, a start-up company guided by Professor Cumaraswamy Vipulanandan, developed a system to add a conductive filler to cement that allows it to be accurately monitored — “smart cement,” if you will. Sensytec has been raising eyebrows and garnering plaudits, not to mention further adding to UH’s standing as a gateway for innovation. As the UH Technology Bridge embraces its expanding role as a pillar of the city’s innovation ecosystem, the 75-acre facility now hosts nearly two dozen startup operations as well as three well-established companies (Scaled Solutions, Oleon and Saratech) drawn by the outstanding lab space, office amenities and academic environment. Encouraged and supported by the Chancellor’s Technology Bridging Fund, faculty members recognize that innovation is the embodiment of the search for knowledge at UH.

“I didn’t go into history for the money,” says Professor Frank Holt, with a smile. “I went into money for the history.” That’s his small joke about an academic life devoted to analyzing ancient civilizations through antique coins — and a reminder that research at the University of Houston takes many amazing forms, reaching back into the past and looking ahead to the future, grounded in a high-tech lab on campus or soaring above the Earth in the International Space Station. Anchored by five National Research Centers (for superconducting manufacture, border and trade, airborne laser mapping, subsea systems and learning disabilities), UH scholars and scientists have created knowledge for its own sake, but also successfully transferred that newfound intelligence from the world of ideas into the marketplace, providing real-world solutions to real-world challenges in energy, health care, data science, infrastructure and myriad other fields. Research at UH is as current as tomorrow and, like Frank Holt, vitally interested in change.

Whose house? We know that one: Coogs’ House! But whose building? Um … hard to say sometimes. One constant at UH has been change, with more than a billion dollars in construction upgrading the campus in the past decade to accommodate our steadily increasing student body. And the pace continues. The Core Renovation Project turned the “Old” Science Building into a decidedly “newer” facility while work got underway on historic Roy G. Cullen, UH’s very first edifice, constructed in 1939. The opening of Garage No. 5 (with 2,500 spaces) and the groundbreaking for Garage No. 6 (another 2,500 spaces) promised to help address that perennial challenge. Meanwhile, announcements of two other major projects grabbed considerable attention — with the Hilton University of Houston planning to nearly double its room capacity and the UH Law Center looking ahead to a new $90 million building named to recognize the late UHLC Alumnus, John M. O’Quinn. And, farther afield, the instructional sites in Katy and Sugar Land both were graced with new buildings.

“I would give UH an A-plus,” says Alicia Lewis, principal of Blackshear Elementary. That’s one of a half dozen schools the University has been working with as part of its Third Ward Initiative to assist the historic neighborhood that surrounds the campus. As Cougar volunteers help area students make scholastic progress, other UH resources have been devoted to improving health care outcomes, cultural ventures and overall economic development. In particular, the SURE (Stimulating Urban Renewal through Entrepreneurship) program that prepares community members to launch their own companies continues to win awards and enrich the commercial landscape of the neighborhood. That, of course, is an admirable example of taking care of business right in our own backyard. And UH has a tremendous impact across the entire region it serves as “Houston’s University.” When we had UH’s local economic impact analyzed, the results were remarkable, with $6.4 billion being generated annually — the equivalent of supporting 62,000 jobs. Principal Lewis would likely give us high marks for that as well.

Taxpayers’ Return on Each $1 Invested in UH

Number of UH’s SURE Entrepreneurs to Date

The arts are everywhere at UH, from lecture halls and performance stages to studios and rehearsal rooms. But on a beautiful autumn evening, the artistic epicenter of the campus was located beneath the stars in Wilhelmina’s Grove, where a contingent of artists and art lovers gathered to have supper and celebrate the 50th anniversary of the Public Art of the University of Houston System collection. Looming large over the unique event was “Mobius Houston,” Marta Chilindrón’s stunning on-site sculpture commissioned as the inaugural piece in the temporary public art installation series that commemorates PAUHS’s half-century of adorning UH and its sister institutions. Joining the salute, “On Site,” an exquisite monograph chronicling the program’s vibrant history, has been published and a series of public tours and participatory studios are being held to etch the anniversary’s significance into UHS — and the public’s — memory. Art continues to flourish at UH, with our students developing their personal sensibilities and professional skills while our community revels in the increasingly rewarding Public Art experience we share with them.

University in Texas to Create a Public Art Program

They call it March Madness because you’d be crazy not to get excited if your basketball team is playing. The Cougars enjoyed a dose of that high-spirited lunacy last season, making its way to the NCAA Tournament’s Sweet 16 for the first time in more than three decades. That coup followed winning the American Athletic Conference championship outright — and they were not flying solo. UH programs won six titles, including Swimming & Diving, Women’s Indoor Track & Field, Men’s Outdoor Track & Field, Women’s Golf and Men’s Indoor Track & Field. The latter also finished third nationally at the NCAA Championships for the second straight season. While they were making the grade athletically, they were making the grades academically as well. Three Houston student-athletes — Mario Burke (Men’s Track & Field), Savannah Heebner (Softball) and Peyton Kondis (Swimming & Diving) — were named the AAC’s Scholar-Athletes of the Year for their sports, while women’s golfer Leonie Harm was named the league’s overall Female Scholar-Athlete of the Year.

Conference Coaches of the Year

Momentum reaches its greatest force not from a single event but from a series of events.

As president of the largest of the four UH System institutions, she has guided the University of Houston to the highest levels of national recognition and prestige. During her tenure, UH has steadily increased student graduation rates and grown the number and stature of nationally-ranked academic programs — most recently, the designation of the Wolff Center for Entrepreneurship as No. 1 in the nation. UH is a Tier One university with a Phi Beta Kappa chapter. Other achievements of her administration have been the unprecedented program of construction and refurbishing of dozens of buildings on campus, and the creation of three new colleges, including the College of Medicine whose mission will be to prepare primary care physicians to serve in rural and urban areas of Texas where access to proper health care is difficult.

One of the most impressive highlights of this past year has been the success of the “Here, We Go” fundraising campaign, which surpassed its $1 billion goal 18 months ahead of schedule.

Widely considered as Houston’s “powerhouse,” UH generates an annual impact of $6.4 billion in the region, providing the educated work force and resources that contribute to Texas being the nation’s second largest economy.

University of Houston System Board of Regents 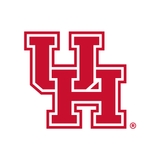