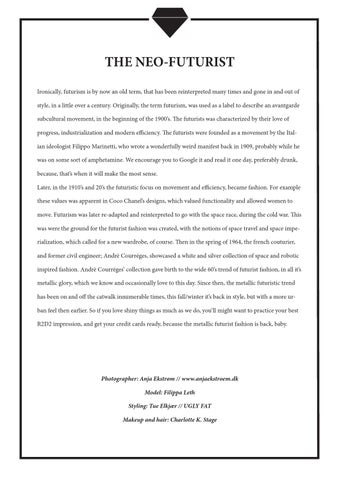 THE NEO-FUTURIST Ironically, futurism is by now an old term, that has been reinterpreted many times and gone in and out of style, in a little over a century. Originally, the term futurism, was used as a label to describe an avantgarde subcultural movement, in the beginning of the 1900’s. The futurists was characterized by their love of progress, industrialization and modern efficiency. The futurists were founded as a movement by the Italian ideologist Filippo Marinetti, who wrote a wonderfully weird manifest back in 1909, probably while he was on some sort of amphetamine. We encourage you to Google it and read it one day, preferably drunk, because, that’s when it will make the most sense. Later, in the 1910’s and 20’s the futuristic focus on movement and efficiency, became fashion. For example these values was apparent in Coco Chanel’s designs, which valued functionality and allowed women to move. Futurism was later re-adapted and reinterpreted to go with the space race, during the cold war. This was were the ground for the futurist fashion was created, with the notions of space travel and space imperialization, which called for a new wardrobe, of course. Then in the spring of 1964, the french couturier, and former civil engineer; Andrè Courréges, showcased a white and silver collection of space and robotic inspired fashion. Andrè Courréges’ collection gave birth to the wide 60’s trend of futurist fashion, in all it’s metallic glory, which we know and occasionally love to this day. Since then, the metallic futuristic trend has been on and off the catwalk innumerable times, this fall/winter it’s back in style, but with a more urban feel then earlier. So if you love shiny things as much as we do, you’ll might want to practice your best R2D2 impression, and get your credit cards ready, because the metallic futurist fashion is back, baby. 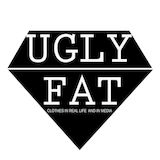 The Smarty Pants issue This time we're gettin' our smarts on.

The Smarty Pants issue This time we're gettin' our smarts on.