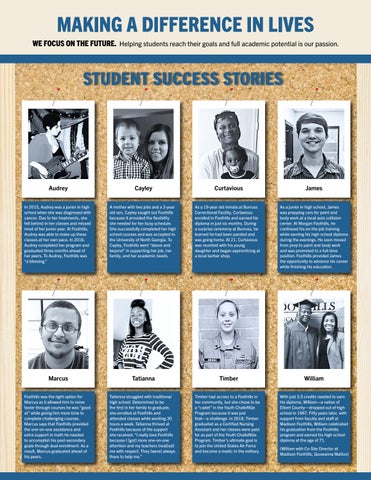 MAKING A DIFFERENCE IN LIVES WE FOCUS ON THE FUTURE. Helping students reach their goals and full academic potential is our passion.

In 2015, Audrey was a junior in high school when she was diagnosed with cancer. Due to her treatments, she fell behind in her classes and missed most of her junior year. At Foothills, Audrey was able to make up these classes at her own pace. In 2016, Audrey completed her program and graduated three months ahead of her peers. To Audrey, Foothills was “a blessing.”

A mother with two jobs and a 3-year old son, Cayley sought out Foothills because it provided the flexibility she needed for her busy schedule. She successfully completed her high school courses and was accepted to the University of North Georgia. To Cayley, Foothills went “above and beyond” in supporting her job, her family, and her academic needs.

Foothills was the right option for Marcus as it allowed him to move faster through courses he was “good at” while giving him more time to complete challenging courses. Marcus says that Foothills provided the one-on-one assistance and extra support in math he needed to accomplish his post-secondary goals through dual enrollment. As a result, Marcus graduated ahead of his peers.

Tatianna struggled with traditional high school. Determined to be the first in her family to graduate, she enrolled at Foothills and attended classes while working 30 hours a week. Tatianna thrived at Foothills because of the support she received. “I really love Foothills because I [got] more one-on-one attention and my teachers treat[ed] me with respect. They [were] always there to help me.”

Curtavious As a 19-year old inmate at Burruss Correctional Facility, Curtavious enrolled in Foothills and earned his diploma in just six months. During a surprise ceremony at Burruss, he learned he had been paroled and was going home. At 21, Curtavious was reunited with his young daughter and began apprenticing at a local barber shop.

Timber Timber had access to a Foothills in her community, but she chose to be a “cadet” in the Youth ChalleNGe Program because it was just that—a challenge. In 2018, Timber graduated as a Certified Nursing Assistant and her classes were paid for as part of the Youth ChalleNGe Program. Timber’s ultimate goal is to join the United States Air Force and become a medic in the military.

James As a junior in high school, James was prepping cars for paint and body work at a local auto collision center. At Morgan Foothills, he continued his on-the-job training while earning his high school diploma during the evenings. He soon moved from prep to paint and body work and was promoted to a full-time position. Foothills provided James the opportunity to advance his career while finishing his education.

William With just 3.5 credits needed to earn his diploma, William—a native of Elbert County—dropped out of high school in 1967. Fifty years later, with support from faculty and staff at Madison Foothills, William celebrated his graduation from the Foothills program and earned his high school diploma at the age of 71. (William with Co-Site Director at Madison Foothills, Quowanna Mattox) 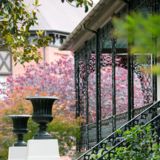 Foothills Education Charter High School is making a difference in Georgia. Learn all about us!

Foothills Education Charter High School is making a difference in Georgia. Learn all about us!