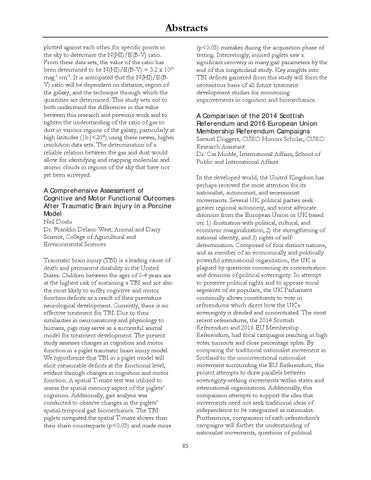 Abstracts plotted against each other for specific points in the sky to determine the N(HI)/E(B-V) ratio. From these data sets, the value of the ratio has been determined to be N(HI)/E(B-V) = 3.2 x 1021 mag-1 cm-2. It is anticipated that the N(HI)/E(BV) ratio will be dependent on distance, region of the galaxy, and the technique through which the quantities are determined. This study sets out to both understand the differences in this value between this research and previous work and to tighten the understanding of the ratio of gas to dust in various regions of the galaxy, particularly at high latitudes (|b|&lt;20°) using these newer, higher resolution data sets. The determination of a reliable relation between the gas and dust would allow for identifying and mapping molecular and atomic clouds in regions of the sky that have not yet been surveyed.

(p&lt;0.05) mistakes during the acquisition phase of testing. Interestingly, injured piglets saw a significant recovery in many gait parameters by the end of this longitudinal study. Key insights into TBI deficits garnered from this study will form the necessitous basis of all future treatment development studies for monitoring improvements in cognition and biomechanics. A Comparison of the 2014 Scottish Referendum and 2016 European Union Membership Referendum Campaigns Samuel Driggers, CURO Honors Scholar, CURO Research Assistant Dr. Cas Mudde, International Affairs, School of Public and International Affairs In the developed world, the United Kingdom has perhaps received the most attention for its nationalist, autonomist, and secessionist movements. Several UK political parties seek greater regional autonomy, and some advocate disunion from the European Union or UK based on: 1) frustration with political, cultural, and economic marginalization, 2) the strengthening of national identity, and 3) rights of selfdetermination. Composed of four distinct nations, and as member of an economically and politically powerful international organization, the UK is plagued by questions concerning its concentration and divisions of political sovereignty. In attempt to preserve political rights and to appease vocal segments of its populace, the UK Parliament continually allows constituents to vote in referendums which direct how the UK&#39;s sovereignty is divided and concentrated. The most recent referendums, the 2014 Scottish Referendum and 2016 EU Membership Referendum, had focal campaigns resulting in high voter turnouts and close percentage splits. By comparing the traditional nationalist movement in Scotland to the unconventional nationalist movement surrounding the EU Referendum, this project attempts to draw parallels between sovereignty-seeking movements within states and international organizations. Additionally, this comparison attempts to support the idea that movements need not seek traditional ideas of independence to be categorized as nationalist. Furthermore, comparison of each referendum’s campaigns will further the understanding of nationalist movements, questions of political

A Comprehensive Assessment of Cognitive and Motor Functional Outcomes After Traumatic Brain Injury in a Porcine Model Neil Doshi Dr. Franklin Delano West, Animal and Dairy Science, College of Agricultural and Environmental Sciences Traumatic brain injury (TBI) is a leading cause of death and permanent disability in the United States. Children between the ages of 0-4 years are at the highest risk of sustaining a TBI and are also the most likely to suffer cognitive and motor function deficits as a result of their premature neurological development. Currently, there is no effective treatment for TBI. Due to their similarities in neuroanatomy and physiology to humans, pigs may serve as a successful animal model for treatment development. The present study assesses changes in cognition and motor function in a piglet traumatic brain injury model. We hypothesize that TBI in a piglet model will elicit measurable deficits at the functional level, evident through changes in cognition and motor function. A spatial T-maze test was utilized to assess the spatial memory aspect of the piglets’ cognition. Additionally, gait analysis was conducted to observe changes in the piglets’ spatial-temporal gait biomechanics. The TBI piglets navigated the spatial T-maze slower than their sham counterparts (p&lt;0.05) and made more 85