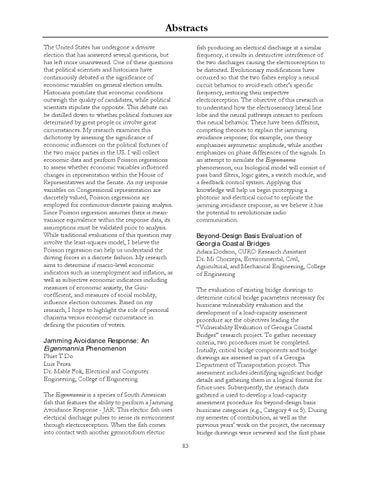 Abstracts The United States has undergone a divisive election that has answered several questions, but has left more unanswered. One of these questions that political scientists and historians have continuously debated is the significance of economic variables on general election results. Historians postulate that economic conditions outweigh the quality of candidates, while political scientists stipulate the opposite. This debate can be distilled down to whether political fortunes are determined by great people or involve great circumstances. My research examines this dichotomy by assessing the significance of economic influences on the political fortunes of the two major parties in the US. I will collect economic data and perform Poisson regressions to assess whether economic variables influenced changes in representation within the House of Representatives and the Senate. As my response variables on Congressional representation are discretely valued, Poisson regressions are employed for continuous-discrete pairing analysis. Since Poisson regression assumes there is meanvariance equivalence within the response data, its assumptions must be validated prior to analysis. While traditional evaluations of this question may involve the least-squares model, I believe the Poisson regression can help us understand the driving forces in a discrete fashion. My research aims to determine if macro-level economic indicators such as unemployment and inflation, as well as subjective economic indicators including measures of economic anxiety, the Ginicoefficient, and measures of social mobility, influence election outcomes. Based on my research, I hope to highlight the role of personal charisma versus economic circumstance in defining the priorities of voters.

fish producing an electrical discharge at a similar frequency, it results in destructive interference of the two discharges causing the electroreception to be distorted. Evolutionary modifications have occurred so that the two fishes employ a neural circuit behavior to avoid each other’s specific frequency, restoring their respective electroreception. The objective of this research is to understand how the electrosensory lateral line lobe and the neural pathways interact to perform this neural behavior. There have been different, competing theories to explain the jamming avoidance response; for example, one theory emphasizes asymmetric amplitude, while another emphasizes on phase differences of the signals. In an attempt to simulate the Eigenmannia phenomenon, our biological model will consist of pass band filters, logic gates, a switch module, and a feedback control system. Applying this knowledge will help us begin prototyping a photonic and electrical circuit to replicate the jamming avoidance response, as we believe it has the potential to revolutionize radio communication. Beyond-Design Basis Evaluation of Georgia Coastal Bridges Adara Dodson, CURO Research Assistant Dr. Mi Chorzepa, Environmental, Civil, Agricultural, and Mechanical Engineering, College of Engineering The evaluation of existing bridge drawings to determine critical bridge parameters necessary for hurricane vulnerability evaluation and the development of a load-capacity assessment procedure are the objectives leading the “Vulnerability Evaluation of Georgia Coastal Bridges” research project. To gather necessary criteria, two procedures must be completed. Initially, critical bridge components and bridge drawings are assessed as part of a Georgia Department of Transportation project. This assessment includes identifying significant bridge details and gathering them in a logical format for future uses. Subsequently, the research data gathered is used to develop a load-capacity assessment procedure for beyond-design basis hurricane categories (e.g., Category 4 or 5). During my semester of contribution, as well as the previous years’ work on the project, the necessary bridge drawings were reviewed and the first phase

Jamming Avoidance Response: An Eigenmannia Phenomenon Phiet T Do Luis Perea Dr. Mable Fok, Electrical and Computer Engineering, College of Engineering The Eigenmannia is a species of South American fish that features the ability to perform a Jamming Avoidance Response - JAR. This electric fish uses electrical discharge pulses to sense its environment through electroreception. When the fish comes into contact with another gymnotiform electric 83