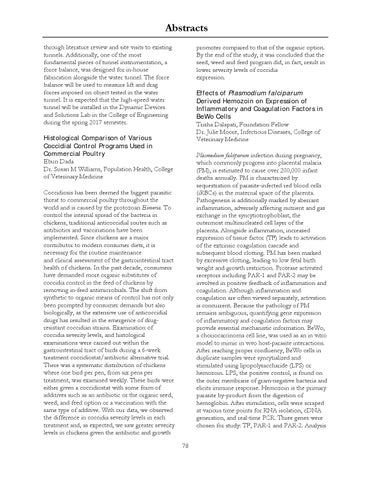 Abstracts through literature review and site visits to existing tunnels. Additionally, one of the most fundamental pieces of tunnel instrumentation, a force balance, was designed for in-house fabrication alongside the water tunnel. The force balance will be used to measure lift and drag forces imposed on object tested in the water tunnel. It is expected that the high-speed water tunnel will be installed in the Dynamic Devices and Solutions Lab in the College of Engineering during the spring 2017 semester.

promoter compared to that of the organic option. By the end of the study, it was concluded that the seed, weed and feed program did, in fact, result in lower severity levels of coccidia expression. Effects of Plasmodium falciparum Derived Hemozoin on Expression of Inflammatory and Coagulation Factors in BeWo Cells Trisha Dalapati, Foundation Fellow Dr. Julie Moore, Infectious Diseases, College of Veterinary Medicine

Plasmodium falciparum infection during pregnancy, which commonly progress into placental malaria (PM), is estimated to cause over 200,000 infant deaths annually. PM is characterized by sequestration of parasite-infected red blood cells (iRBCs) in the maternal space of the placenta. Pathogenesis is additionally marked by aberrant inflammation, adversely affecting nutrient and gas exchange in the syncytiotrophoblast, the outermost multinucleated cell layer of the placenta. Alongside inflammation, increased expression of tissue factor (TF) leads to activation of the extrinsic coagulation cascade and subsequent blood clotting. PM has been marked by excessive clotting, leading to low fetal birth weight and growth restriction. Protease activated receptors including PAR-1 and PAR-2 may be involved in positive feedback of inflammation and coagulation. Although inflammation and coagulation are often viewed separately, activation is concurrent. Because the pathology of PM remains ambiguous, quantifying gene expression of inflammatory and coagulation factors may provide essential mechanistic information. BeWo, a choriocarcinoma cell line, was used as an in vitro model to mimic in vivo host-parasite interactions. After reaching proper confluency, BeWo cells in duplicate samples were syncytialized and stimulated using lipopolysaccharide (LPS) or hemozoin. LPS, the positive control, is found on the outer membrane of gram-negative bacteria and elicits immune response. Hemozoin is the primary parasite by-product from the digestion of hemoglobin. After stimulation, cells were scraped at various time points for RNA isolation, cDNA generation, and real-time PCR. Three genes were chosen for study: TF, PAR-1 and PAR-2. Analysis

Coccidiosis has been deemed the biggest parasitic threat to commercial poultry throughout the world and is caused by the protozoan Eimeria. To control the internal spread of the bacteria in chickens, traditional anticoccidial routes such as antibiotics and vaccinations have been implemented. Since chickens are a major contributor to modern consumer diets, it is necessary for the routine maintenance and clinical assessment of the gastrointestinal tract health of chickens. In the past decade, consumers have demanded more organic substitutes of coccidia control in the feed of chickens by removing in-feed antimicrobials. The shift from synthetic to organic means of control has not only been prompted by consumer demands but also biologically, as the extensive use of anticoccidial drugs has resulted in the emergence of drugresistant coccidian strains. Examination of coccidia severity levels, and histological examinations were carried out within the gastrointestinal tract of birds during a 6-week treatment coccidiostat/antibiotic alternative trial. There was a systematic distribution of chickens where one bird per pen, from six pens per treatment, was examined weekly. These birds were either given a coccidiostat with some form of additives such as an antibiotic or the organic seed, weed, and feed option or a vaccination with the same type of additive. With our data, we observed the difference in coccidia severity levels in each treatment and, as expected, we saw greater severity levels in chickens given the antibiotic and growth 78