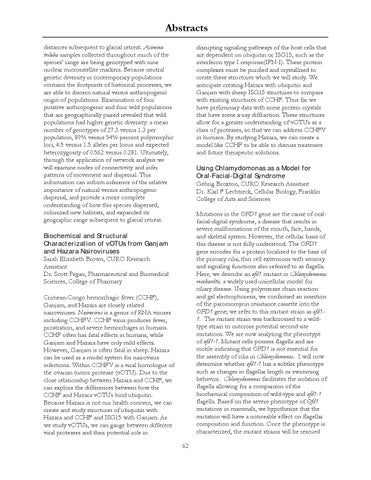 Abstracts distances subsequent to glacial retreat. Asimina triloba samples collected throughout much of the speciesâ&amp;#x20AC;&amp;#x2122; range are being genotyped with nine nuclear microsatellite markers. Because neutral genetic diversity in contemporary populations contains the footprints of historical processes, we are able to discern natural versus anthropogenic origin of populations. Examination of four putative anthropogenic and four wild populations that are geographically paired revealed that wild populations had higher genetic diversity: a mean number of genotypes of 27.3 versus 1.3 per population, 89% versus 54% percent polymorphic loci, 4.5 versus 1.5 alleles per locus and expected heterozygosity of 0.562 versus 0.281. Ultimately, through the application of network analysis we will examine nodes of connectivity and infer patterns of movement and dispersal. This information can inform inference of the relative importance of natural versus anthropogenic dispersal, and provide a more complete understanding of how this species dispersed, colonized new habitats, and expanded its geographic range subsequent to glacial retreat.

disrupting signaling pathways of the host cells that are dependent on ubiquitin or ISG15, such as the interferon type I response(IFN-I). These protein complexes must be purified and crystallized to create these structures which we will study. We anticipate creating Hazara with ubiquitin and Ganjam with sheep ISG15 structures to compare with existing structures of CCHF. Thus far we have preliminary data with some protein crystals that have some x-ray diffraction. These structures allow for a greater understanding of vOTUs as a class of proteases, so that we can address CCHFV in humans. By studying Hazara, we can create a model like CCHF to be able to discuss treatment and future therapeutic solutions. Using Chlamydomonas as a Model for Oral-Facial-Digital Syndrome Gehrig Broxton, CURO Research Assistant Dr. Karl F Lechtreck, Cellular Biology, Franklin College of Arts and Sciences Mutations in the OFD1 gene are the cause of oralfacial-digital syndrome, a disease that results in severe malformations of the mouth, face, hands, and skeletal system. However, the cellular basis of this disease is not fully understood. The OFD1 gene encodes for a protein localized to the base of the primary cilia, thin cell extensions with sensory and signaling functions also referred to as flagella. Here, we describe an ofd1 mutant in Chlamydomonas reinhardtii, a widely used unicellular model for ciliary disease. Using polymerase chain reaction and gel electrophoresis, we confirmed an insertion of the paromomycin resistance cassette into the OFD1 gene; we refer to this mutant strain as ofd11. The mutant strain was backcrossed to a wildtype strain to outcross potential second site mutations. We are now analyzing the phenotype of ofd1-1. Mutant cells possess flagella and are motile indicating that OFD1 is not essential for the assembly of cilia in Chlamydomonas. I will now determine whether ofd1-1 has a subtler phenotype such as changes in flagellar length or swimming behavior. Chlamydomonas facilitates the isolation of flagella allowing for a comparison of the biochemical composition of wild-type and ofd1-1 flagella. Based on the severe phenotype of Ofd1 mutations in mammals, we hypothesize that the mutation will have a noticeable effect on flagellar composition and function. Once the phenotype is characterized, the mutant strains will be rescued

Biochemical and Structural Characterization of vOTUs from Ganjam and Hazara Nairoviruses Sarah Elizabeth Brown, CURO Research Assistant Dr. Scott Pegan, Pharmaceutical and Biomedical Sciences, College of Pharmacy Crimean-Congo hemorrhagic fever (CCHF), Ganjam, and Hazara are closely related nairoviruses. Nairovirus is a genus of RNA viruses including CCHFV. CCHF virus produces fever, prostration, and severe hemorrhages in humans. CCHF often has fatal effects in humans, while Ganjam and Hazara have only mild effects. However, Ganjam is often fatal in sheep. Hazara can be used as a model system for nairovirus infections. Within CCHFV is a viral homologue of the ovarian tumor protease (vOTU). Due to the close relationship between Hazara and CCHF, we can explore the differences between how the CCHF and Hazara vOTUs bind ubiquitin. Because Hazara is not our health concern, we can create and study structures of ubiquitin with Hazara and CCHF and ISG15 with Ganjam. As we study vOTUs, we can gauge between different viral proteases and their potential role in 62