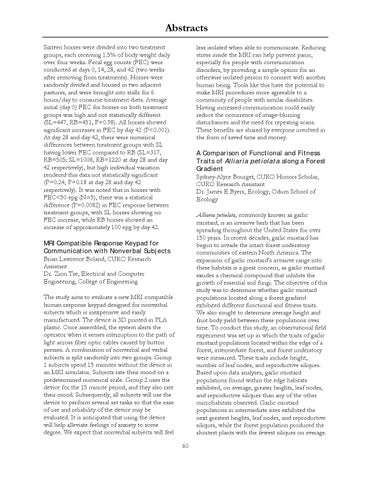 Abstracts Sixteen horses were divided into two treatment groups, each receiving 1.5% of body weight daily over four weeks. Fecal egg counts (FEC) were conducted at days 0, 14, 28, and 42 (two weeks after removing from treatments). Horses were randomly divided and housed in two adjacent pastures, and were brought into stalls for 6 hours/day to consume treatment diets. Average initial (day 0) FEC for horses on both treatment groups was high and not statistically different (SL=447, RB=451, P=0.98). All horses showed significant increases in FEC by day 42 (P&lt;0.001). At day 28 and day 42, there were numerical differences between treatment groups with SL having lower FEC compared to RB (SL=317, RB=505; SL=1008, RB=1220 at day 28 and day 42 respectively), but high individual variation rendered this data not statistically significant (P=0.24, P=0.18 at day 28 and day 42 respectively). It was noted that in horses with FEC&lt;50 epg (N=5), there was a statistical difference (P=0.0082) in FEC response between treatment groups, with SL horses showing no FEC increase, while RB horses showed an increase of approximately 100 epg by day 42.

less isolated when able to communicate. Reducing stress inside the MRI can help prevent panic, especially for people with communication disorders, by providing a simple option for an otherwise isolated person to connect with another human being. Tools like this have the potential to make MRI procedures more agreeable to a community of people with similar disabilities. Having increased communication could easily reduce the occurrence of image-blurring disturbances and the need for repeating scans. These benefits are shared by everyone involved in the form of saved time and money. A Comparison of Functional and Fitness Traits of Alliaria petiolata along a Forest Gradient Sydney-Alyce Bourget, CURO Honors Scholar, CURO Research Assistant Dr. James E Byers, Ecology, Odum School of Ecology Alliaria petiolata, commonly known as garlic mustard, is an invasive herb that has been spreading throughout the United States for over 150 years. In recent decades, garlic mustard has begun to invade the intact forest understory communities of eastern North America. The expansion of garlic mustardâ&amp;#x20AC;&amp;#x2122;s invasive range into these habitats is a great concern, as garlic mustard exudes a chemical compound that inhibits the growth of essential soil fungi. The objective of this study was to determine whether garlic mustard populations located along a forest gradient exhibited different functional and fitness traits. We also sought to determine average height and fruit body yield between these populations over time. To conduct this study, an observational field experiment was set up in which the traits of garlic mustard populations located within the edge of a forest, intermediate forest, and forest understory were measured. These traits include height, number of leaf nodes, and reproductive siliques. Based upon data analyses, garlic mustard populations found within the edge habitats exhibited, on average, greater heights, leaf nodes, and reproductive siliques than any of the other microhabitats observed. Garlic mustard populations in intermediate sites exhibited the next greatest heights, leaf nodes, and reproductive siliques, while the forest population produced the shortest plants with the fewest siliques on average.

MRI Compatible Response Keypad for Communication with Nonverbal Subjects Brian Lawrence Boland, CURO Research Assistant Dr. Zion Tse, Electrical and Computer Engineering, College of Engineering The study aims to evaluate a new MRI compatible human response keypad designed for nonverbal subjects which is inexpensive and easily manufactured. The device is 3D printed in PLA plastic. Once assembled, the system alerts the operator when it senses interruption to the path of light across fiber optic cables caused by button presses. A combination of nonverbal and verbal subjects is split randomly into two groups. Group 1 subjects spend 15 minutes without the device in an MRI simulator. Subjects rate their mood on a predetermined numerical scale. Group 2 uses the device for the 15 minute period, and they also rate their mood. Subsequently, all subjects will use the device to perform several set tasks so that the ease of use and reliability of the device may be evaluated. It is anticipated that using the device will help alleviate feelings of anxiety to some degree. We expect that nonverbal subjects will feel 60