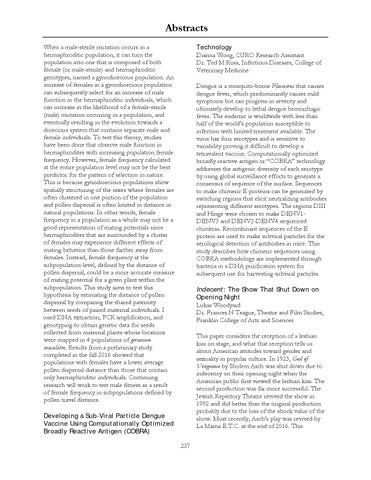 Abstracts When a male-sterile mutation occurs in a hermaphroditic population, it can turn the population into one that is composed of both female (or male-sterile) and hermaphroditic genotypes, named a gynodioecious population. An increase of females in a gynodioecious population can subsequently select for an increase of male function in the hermaphroditic individuals, which can increase in the likelihood of a female-sterile (male) mutation occurring in a population, and eventually resulting in the evolution towards a dioecious system that contains separate male and female individuals. To test this theory, studies have been done that observe male function in hermaphrodites with increasing population female frequency. However, female frequency calculated at the entire population level may not be the best predictor for the pattern of selection in nature. This is because gynodioecious populations show spatially structuring of the sexes where females are often clustered in one portion of the population and pollen dispersal is often limited in distance in natural populations. In other words, female frequency in a population as a whole may not be a good representation of mating potentials since hermaphrodites that are surrounded by a cluster of females may experience different effects of mating behavior than those farther away from females. Instead, female frequency at the subpopulation-level, defined by the distance of pollen dispersal, could be a more accurate measure of mating potential for a given plant within the subpopulation. This study aims to test this hypothesis by estimating the distance of pollen dispersal by comparing the shared paternity between seeds of paired maternal individuals. I used DNA extraction, PCR amplification, and genotyping to obtain genetic data for seeds collected from maternal plants whose locations were mapped in 4 populations of geranium maculatm. Results from a preliminary study completed in the fall 2016 showed that populations with females have a lower average pollen dispersal distance than those that contain only hermaphroditic individuals. Continuing research will work to test male fitness as a result of female frequency in subpopulations defined by pollen travel distance.

Technology Dianna Wong, CURO Research Assistant Dr. Ted M Ross, Infectious Diseases, College of Veterinary Medicine Dengue is a mosquito-borne Flavivirus that causes dengue fever, which predominantly causes mild symptoms but can progress in severity and ultimately develop to lethal dengue hemorrhagic fever. The endemic is worldwide with less than half of the world’s population susceptible to infection with limited treatment available. The virus has four serotypes and is sensitive to variability proving it difficult to develop a tetravalent vaccine. Computationally optimized broadly reactive antigen or “COBRA” technology addresses the antigenic diversity of each serotype by using global surveillance efforts to generate a consensus of sequence of the surface. Sequences to make chimeric E proteins can be generated by switching regions that elicit neutralizing antibodies representing different serotypes. The regions DIII and Hinge were chosen to make DENV1DENV3 and DENV2-DENV4 sequenced chimeras. Recombinant sequences of the E protein are used to make subviral particles for the serological detection of antibodies in mice. This study describes how chimeric sequences using COBRA methodology are implemented through bacteria in a DNA purification system for subsequent use for harvesting subviral particles. Indecent: The Show That Shut Down on Opening Night Lukas Woodyard Dr. Frances N Teague, Theatre and Film Studies, Franklin College of Arts and Sciences This paper considers the reception of a lesbian kiss on stage, and what that reception tells us about American attitudes toward gender and sexuality in popular culture. In 1923, God of Vengeance by Sholem Asch was shut down due to indecency on their opening night when the American public first viewed the lesbian kiss. The second production was far more successful. The Jewish Repertory Theatre revived the show in 1992 and did better than the original production probably due to the loss of the shock value of the show. Most recently, Asch’s play was revived by La Mama E.T.C. at the end of 2016. This