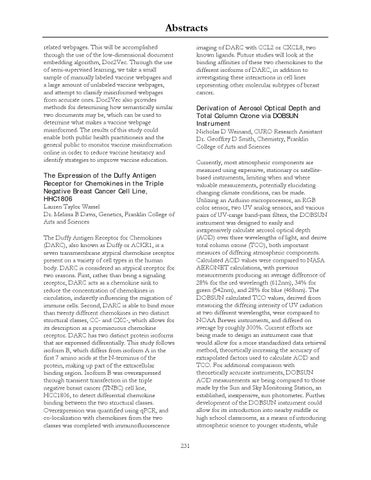 Abstracts related webpages. This will be accomplished through the use of the low-dimensional document embedding algorithm, Doc2Vec. Through the use of semi-supervised learning, we take a small sample of manually labeled vaccine webpages and a large amount of unlabeled vaccine webpages, and attempt to classify misinformed webpages from accurate ones. Doc2Vec also provides methods for determining how semantically similar two documents may be, which can be used to determine what makes a vaccine webpage misinformed. The results of this study could enable both public health practitioners and the general public to monitor vaccine misinformation online in order to reduce vaccine hesitancy and identify strategies to improve vaccine education.

imaging of DARC with CCL2 or CXCL8, two known ligands. Future studies will look at the binding affinities of these two chemokines to the different isoforms of DARC, in addition to investigating these interactions in cell lines representing other molecular subtypes of breast cancer. Derivation of Aerosol Optical Depth and Total Column Ozone via DOBSUN Instrument Nicholas D Weinand, CURO Research Assistant Dr. Geoffrey D Smith, Chemistry, Franklin College of Arts and Sciences Currently, most atmospheric components are measured using expensive, stationary or satellitebased instruments, limiting when and where valuable measurements, potentially elucidating changing climate conditions, can be made. Utilizing an Arduino microprocessor, an RGB color sensor, two UV analog sensors, and various pairs of UV-range band-pass filters, the DOBSUN instrument was designed to easily and inexpensively calculate aerosol optical depth (AOD) over three wavelengths of light, and derive total column ozone (TCO), both important measures of differing atmospheric components. Calculated AOD values were compared to NASA AERONET calculations, with previous measurements producing an average difference of 28% for the red wavelength (612nm), 34% for green (542nm), and 28% for blue (468nm). The DOBSUN calculated TCO values, derived from measuring the differing intensity of UV radiation at two different wavelengths, were compared to NOAA Brewer instruments, and differed on average by roughly 300%. Current efforts are being made to design an instrument case that would allow for a more standardized data retrieval method, theoretically increasing the accuracy of extrapolated factors used to calculate AOD and TCO. For additional comparison with theoretically accurate instruments, DOBSUN AOD measurements are being compared to those made by the Sun and Sky Monitoring Station, an established, inexpensive, sun photometer. Further development of the DOBSUN instrument could allow for its introduction into nearby middle or high school classrooms, as a means of introducing atmospheric science to younger students, while

The Expression of the Duffy Antigen Receptor for Chemokines in the Triple Negative Breast Cancer Cell Line, HHC1806 Lauren Taylor Wassel Dr. Melissa B Davis, Genetics, Franklin College of Arts and Sciences The Duffy Antigen Receptor for Chemokines (DARC), also known as Duffy or ACKR1, is a seven transmembrane atypical chemokine receptor present on a variety of cell types in the human body. DARC is considered an atypical receptor for two reasons. First, rather than being a signaling receptor, DARC acts as a chemokine sink to reduce the concentration of chemokines in circulation, indirectly influencing the migration of immune cells. Second, DARC is able to bind more than twenty different chemokines in two distinct structural classes, CC- and CXC-, which allows for its description as a promiscuous chemokine receptor. DARC has two distinct protein isoforms that are expressed differentially. This study follows isoform B, which differs from isoform A in the first 7 amino acids at the N-terminus of the protein, making up part of the extracellular binding region. Isoform B was overexpressed through transient transfection in the triple negative breast cancer (TNBC) cell line, HCC1806, to detect differential chemokine binding between the two structural classes. Overexpression was quantified using qPCR, and co-localization with chemokines from the two classes was completed with immunofluorescence 231