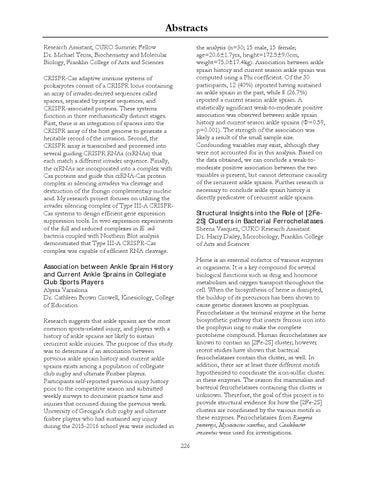 CRISPR-Cas adaptive immune systems of prokaryotes consist of a CRISPR locus containing an array of invader-derived sequences called spacers, separated by repeat sequences, and CRISPR-associated proteins. These systems function in three mechanistically distinct stages. First, there is an integration of spacers into the CRISPR array of the host genome to generate a heritable record of the invasion. Second, the CRISPR array is transcribed and processed into several guiding CRISPR RNAs (crRNAs) that each match a different invader sequence. Finally, the crRNAs are incorporated into a complex with Cas proteins and guide this crRNA-Cas protein complex in silencing invaders via cleavage and destruction of the foreign complementary nucleic acid. My research project focuses on utilizing the invader silencing complex of Type III-A CRISPRCas systems to design efficient gene expression suppression tools. In vivo expression experiments of the full and reduced complexes in E. coli bacteria coupled with Northern Blot analysis demonstrated that Type III-A CRISPR-Cas complex was capable of efficient RNA cleavage.

Structural Insights into the Role of [2Fe2S] Clusters in Bacterial Ferrochelatases Sheena Vasquez, CURO Research Assistant Dr. Harry Dailey, Microbiology, Franklin College of Arts and Sciences Heme is an essential cofactor of various enzymes in organisms. It is a key compound for several biological functions such as drug and hormone metabolism and oxygen transport throughout the cell. When the biosynthesis of heme is disrupted, the buildup of its precursors has been shown to cause genetic diseases known as porphyrias. Ferrochelatase is the terminal enzyme in the heme biosynthetic pathway that inserts ferrous iron into the porphyrin ring to make the complete protoheme compound. Human ferrochelatases are known to contain an [2Fe-2S] cluster; however recent studies have shown that bacterial ferrochelatases contain this cluster, as well. In addition, there are at least three different motifs hypothesized to coordinate the iron-sulfur cluster in these enzymes. The reason for mammalian and bacterial ferrochelatases containing this cluster is unknown. Therefore, the goal of this project is to provide structural evidence for how the [2Fe-2S] clusters are coordinated by the various motifs in these enzymes. Ferrochelatases from Ruegeria pomeroyi, Myxococcus xanthus, and Caulobacter crescentus were used for investigations.

Association between Ankle Sprain History and Current Ankle Sprains in Collegiate Club Sports Players Alyssa Varsalona Dr. Cathleen Brown Crowell, Kinesiology, College of Education Research suggests that ankle sprains are the most common sports-related injury, and players with a history of ankle sprains are likely to sustain recurrent ankle injuries. The purpose of this study was to determine if an association between previous ankle sprain history and current ankle sprains exists among a population of collegiate club rugby and ultimate Frisbee players. Participants self-reported previous injury history prior to the competitive season and submitted weekly surveys to document practice time and injuries that occurred during the previous week. University of Georgia’s club rugby and ultimate frisbee players who had sustained any injury during the 2015-2016 school year were included in 226