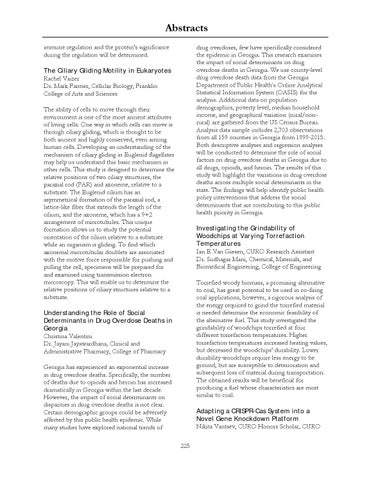 Abstracts immune regulation and the proteinâ&amp;#x20AC;&amp;#x2122;s significance during the regulation will be determined.

The Ciliary Gliding Motility in Eukaryotes Rachel Vaizer Dr. Mark Farmer, Cellular Biology, Franklin College of Arts and Sciences The ability of cells to move through their environment is one of the most ancient attributes of living cells. One way in which cells can move is through ciliary gliding, which is thought to be both ancient and highly conserved, even among human cells. Developing an understanding of the mechanism of ciliary gliding in Euglenid flagellates may help us understand this basic mechanism in other cells. This study is designed to determine the relative positions of two ciliary structures, the paraxial rod (PAR) and axoneme, relative to a substrate. The Euglenid cilium has an asymmetrical formation of the paraxial rod, a lattice-like fiber that extends the length of the cilium, and the axoneme, which has a 9+2 arrangement of microtubules. This unique formation allows us to study the potential orientation of the cilium relative to a substrate while an organism is gliding. To find which axonemal microtubular doublets are associated with the motive force responsible for pushing and pulling the cell, specimens will be prepared for and examined using transmission electron microscopy. This will enable us to determine the relative positions of ciliary structures relative to a substrate.

Investigating the Grindability of Woodchips at Varying Torrefaction Temperatures Ian E Van Giesen, CURO Research Assistant Dr. Sudhagar Mani, Chemical, Materials, and Biomedical Engineering, College of Engineering Torrefied woody biomass, a promising alternative to coal, has great potential to be used in co-firing coal applications, however, a rigorous analysis of the energy required to grind the torrefied material is needed determine the economic feasibility of the alternative fuel. This study investigated the grindability of woodchips torrefied at four different torrefaction temperatures. Higher torrefaction temperatures increased heating values, but decreased the woodchipsâ&amp;#x20AC;&amp;#x2122; durability. Lower durability woodchips require less energy to be ground, but are susceptible to deterioration and subsequent loss of material during transportation. The obtained results will be beneficial for producing a fuel whose characteristics are most similar to coal.

Understanding the Role of Social Determinants in Drug Overdose Deaths in Georgia Christina Valentini Dr. Jayani Jayawardhana, Clinical and Administrative Pharmacy, College of Pharmacy Georgia has experienced an exponential increase in drug overdose deaths. Specifically, the number of deaths due to opioids and heroin has increased dramatically in Georgia within the last decade. However, the impact of social determinants on disparities in drug overdose deaths is not clear. Certain demographic groups could be adversely affected by this public health epidemic. While many studies have explored national trends of