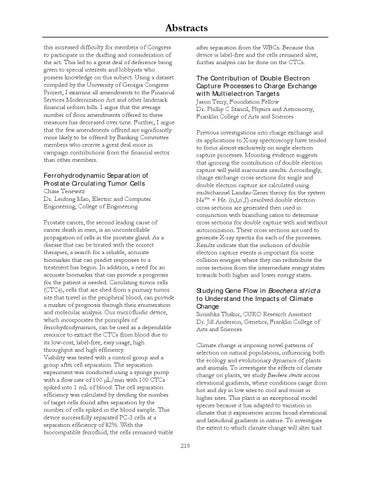 Abstracts this increased difficulty for members of Congress to participate in the drafting and consideration of the act. This led to a great deal of deference being given to special interests and lobbyists who possess knowledge on this subject. Using a dataset compiled by the University of Georgia Congress Project, I examine all amendments to the Financial Services Modernization Act and other landmark financial reform bills. I argue that the average number of floor amendments offered to these measures has decreased over time. Further, I argue that the few amendments offered are significantly more likely to be offered by Banking Committee members who receive a great deal more in campaign contributions from the financial sector than other members.

after separation from the WBCs. Because this device is label-free and the cells remained alive, further analysis can be done on the CTCs. The Contribution of Double Electron Capture Processes to Charge Exchange with Multielectron Targets Jason Terry, Foundation Fellow Dr. Phillip C Stancil, Physics and Astronomy, Franklin College of Arts and Sciences Previous investigations into charge exchange and its applications to X-ray spectroscopy have tended to focus almost exclusively on single electron capture processes. Mounting evidence suggests that ignoring the contribution of double electron capture will yield inaccurate results. Accordingly, charge exchange cross sections for single and double electron capture are calculated using multichannel Landau-Zener theory for the system Ne10+ + He. (n,l,n&#39;,l&#39;)-resolved double electron cross sections are generated then used in conjunction with branching ratios to determine cross sections for double capture with and without autoionization. These cross sections are used to generate X-ray spectra for each of the processes. Results indicate that the inclusion of double electron capture events is important for some collision energies where they can redistribute the cross sections from the intermediate energy states towards both higher and lower energy states.

Ferrohydrodynamic Separation of Prostate Circulating Tumor Cells Chase Tenewitz Dr. Leidong Mao, Electric and Computer Engineering, College of Engineering Prostate cancer, the second leading cause of cancer death in men, is an uncontrollable propagation of cells in the prostate gland. As a disease that can be treated with the correct therapies, a search for a reliable, accurate biomarker that can predict responses to a treatment has begun. In addition, a need for an accurate biomarker that can provide a prognosis for the patient is needed. Circulating tumor cells (CTCs), cells that are shed from a primary tumor site that travel in the peripheral blood, can provide a marker of prognosis through their enumeration and molecular analysis. Our microfluidic device, which incorporates the principles of ferrohydrodynamics, can be used as a dependable resource to extract the CTCs from blood due to its low-cost, label-free, easy usage, high throughput and high efficiency. Viability was tested with a control group and a group after cell separation. The separation experiment was conducted using a syringe pump with a flow rate of 100 ÂľL/min with 100 CTCs spiked into 1 mL of blood. The cell separation efficiency was calculated by dividing the number of target cells found after separation by the number of cells spiked in the blood sample. This device successfully separated PC-3 cells at a separation efficiency of 82%. With the biocompatible ferrofluid, the cells remained viable

Studying Gene Flow in Boechera stricta to Understand the Impacts of Climate Change Sunishka Thakur, CURO Research Assistant Dr. Jill Anderson, Genetics, Franklin College of Arts and Sciences Climate change is imposing novel patterns of selection on natural populations, influencing both the ecology and evolutionary dynamics of plants and animals. To investigate the effects of climate change on plants, we study Boechera stricta across elevational gradients, where conditions range from hot and dry in low sites to cool and moist in higher sites. This plant is an exceptional model species because it has adapted to variation in climate that it experiences across broad elevational and latitudinal gradients in nature. To investigate the extent to which climate change will alter trait 219