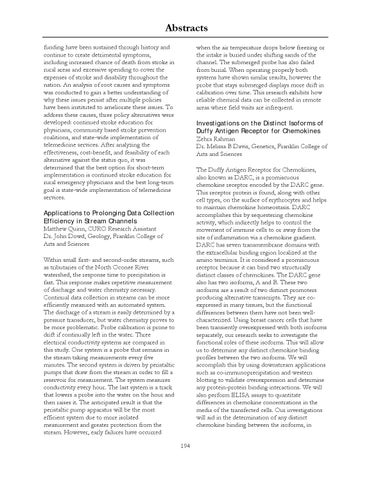 Abstracts funding have been sustained through history and continue to create detrimental symptoms, including increased chance of death from stroke in rural areas and excessive spending to cover the expenses of stroke and disability throughout the nation. An analysis of root causes and symptoms was conducted to gain a better understanding of why these issues persist after multiple policies have been instituted to ameliorate these issues. To address these causes, three policy alternatives were developed: continued stroke education for physicians, community based stroke prevention coalitions, and state-wide implementation of telemedicine services. After analyzing the effectiveness, cost-benefit, and feasibility of each alternative against the status quo, it was determined that the best option for short-term implementation is continued stroke education for rural emergency physicians and the best long-term goal is state-wide implementation of telemedicine services.

when the air temperature drops below freezing or the intake is buried under shifting sands of the channel. The submerged probe has also failed from burial. When operating properly both systems have shown similar results, however the probe that stays submerged displays more drift in calibration over time. This research exhibits how reliable chemical data can be collected in remote areas where field visits are infrequent. Investigations on the Distinct Isoforms of Duffy Antigen Receptor for Chemokines Zehra Rahman Dr. Melissa B Davis, Genetics, Franklin College of Arts and Sciences The Duffy Antigen Receptor for Chemokines, also known as DARC, is a promiscuous chemokine receptor encoded by the DARC gene. This receptor protein is found, along with other cell types, on the surface of erythrocytes and helps to maintain chemokine homeostasis. DARC accomplishes this by sequestering chemokine activity, which indirectly helps to control the movement of immune cells to or away from the site of inflammation via a chemokine gradient. DARC has seven transmembrane domains with the extracellular binding region localized at the amino terminus. It is considered a promiscuous receptor because it can bind two structurally distinct classes of chemokines. The DARC gene also has two isoforms, A and B. These two isoforms are a result of two distinct promoters producing alternative transcripts. They are coexpressed in many tissues, but the functional differences between them have not been wellcharacterized. Using breast cancer cells that have been transiently overexpressed with both isoforms separately, our research seeks to investigate the functional roles of these isoforms. This will allow us to determine any distinct chemokine binding profiles between the two isoforms. We will accomplish this by using downstream applications such as co-immunoprecipitation and western blotting to validate overexpression and determine any protein-protein binding interactions. We will also perform ELISA assays to quantitate differences in chemokine concentrations in the media of the transfected cells. Our investigations will aid in the determination of any distinct chemokine binding between the isoforms, in

Applications to Prolonging Data Collection Efficiency in Stream Channels Matthew Quinn, CURO Research Assistant Dr. John Dowd, Geology, Franklin College of Arts and Sciences Within small first- and second-order streams, such as tributaries of the North Oconee River watershed, the response time to precipitation is fast. This response makes repetitive measurement of discharge and water chemistry necessary. Continual data collection in streams can be more efficiently measured with an automated system. The discharge of a stream is easily determined by a pressure transducer, but water chemistry proves to be more problematic. Probe calibration is prone to drift if continually left in the water. Three electrical conductivity systems are compared in this study. One system is a probe that remains in the stream taking measurements every five minutes. The second system is driven by peristaltic pumps that draw from the stream in order to fill a reservoir for measurement. The system measures conductivity every hour. The last system is a track that lowers a probe into the water on the hour and then raises it. The anticipated result is that the peristaltic pump apparatus will be the most efficient system due to more isolated measurement and greater protection from the stream. However, early failures have occurred 194