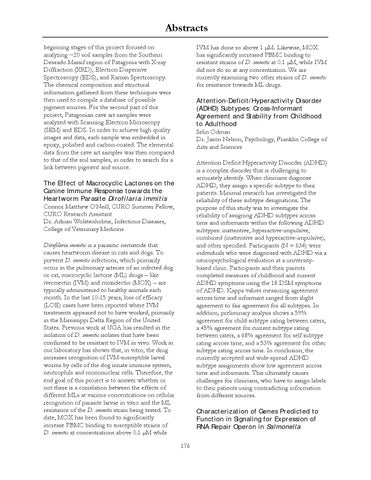 Abstracts beginning stages of this project focused on analyzing ~20 soil samples from the Southern Deseado Massif region of Patagonia with X-ray Diffraction (XRD), Electron Dispersive Spectroscopy (EDS), and Raman Spectroscopy. The chemical composition and structural information gathered from these techniques were then used to compile a database of possible pigment sources. For the second part of this project, Patagonian cave art samples were analyzed with Scanning Electron Microscopy (SEM) and EDS. In order to achieve high quality images and data, each sample was embedded in epoxy, polished and carbon-coated. The elemental data from the cave art samples was then compared to that of the soil samples, in order to search for a link between pigment and source.

IVM has done so above 1 μM. Likewise, MOX has significantly increased PBMC binding to resistant strains of D. immitis at 0.1 μM, while IVM did not do so at any concentration. We are currently examining two other strains of D. immitis for resistance towards ML drugs. Attention-Deficit/Hyperactivity Disorder (ADHD) Subtypes: Cross-Informant Agreement and Stability from Childhood to Adulthood Selin Odman Dr. Jason Nelson, Psychology, Franklin College of Arts and Sciences Attention Deficit Hyperactivity Disorder (ADHD) is a complex disorder that is challenging to accurately identify. When clinicians diagnose ADHD, they assign a specific subtype to their patients. Minimal research has investigated the reliability of these subtype designations. The purpose of this study was to investigate the reliability of assigning ADHD subtypes across time and informants within the following ADHD subtypes: inattentive, hyperactive-impulsive, combined (inattentive and hyperactive-impulsive), and other specified. Participants (N = 634) were individuals who were diagnosed with ADHD via a neuropsychological evaluation at a universitybased clinic. Participants and their parents completed measures of childhood and current ADHD symptoms using the 18 DSM symptoms of ADHD. Kappa values measuring agreement across time and informant ranged from slight agreement to fair agreement for all subtypes. In addition, preliminary analysis shows a 59% agreement for child subtype rating between raters, a 45% agreement for current subtype rating between raters, a 68% agreement for self subtype rating across time, and a 53% agreement for other subtype rating across time. In conclusion, the currently accepted and wide-spread ADHD subtype assignments show low agreement across time and informants. This ultimately causes challenges for clinicians, who have to assign labels to their patients using contradicting information from different sources.

The Effect of Macrocyclic Lactones on the Canine Immune Response towards the Heartworm Parasite Dirofilaria immitis Connor Matthew O&#39;Neill, CURO Summer Fellow, CURO Research Assistant Dr. Adrian Wolstenholme, Infectious Diseases, College of Veterinary Medicine Dirofilaria immitis is a parasitic nematode that causes heartworm disease in cats and dogs. To prevent D. immitis infections, which primarily occur in the pulmonary arteries of an infected dog or cat, macrocyclic lactone (ML) drugs – like ivermectin (IVM) and moxidectin (MOX) – are typically administered to healthy animals each month. In the last 10-15 years, loss of efficacy (LOE) cases have been reported where IVM treatments appeared not to have worked, primarily in the Mississippi Delta Region of the United States. Previous work at UGA has resulted in the isolation of D. immitis isolates that have been confirmed to be resistant to IVM in vivo. Work in our laboratory has shown that, in vitro, the drug increases recognition of IVM-susceptible larval worms by cells of the dog innate immune system, neutrophils and mononuclear cells. Therefore, the end goal of this project is to answer whether or not there is a correlation between the effects of different MLs at various concentrations on cellular recognition of parasite larvae in vitro and the ML resistance of the D. immitis strain being tested. To date, MOX has been found to significantly increase PBMC binding to susceptible strains of D. immitis at concentrations above 0.1 μM while