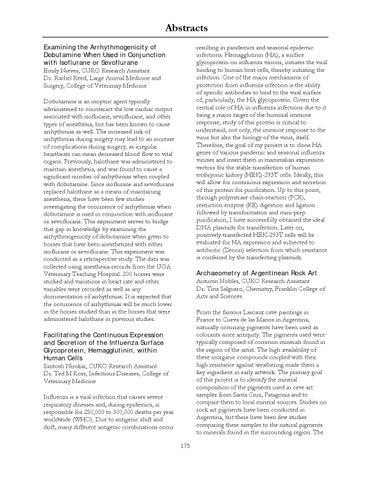 Abstracts resulting in pandemics and seasonal epidemic infections. Hemagglutinin (HA), a surface glycoprotein on influenza virions, initiates the viral binding to human host cells, thereby initiating the infection. One of the major mechanisms of protection from influenza infection is the ability of specific antibodies to bind to the viral surface of, particularly, the HA glycoprotein. Given the central role of HA in influenza infections due to it being a major target of the humoral immune response, study of this protein is critical to understand, not only, the immune response to the virus but also the biology of the virus, itself. Therefore, the goal of my project is to clone HA genes of various pandemic and seasonal influenza viruses and insert them in mammalian expression vectors for the stable transfection of human embryonic kidney (HEK)-293T cells. Ideally, this will allow for continuous expression and secretion of this protein for purification. Up to this point, through polymerase chain-reaction (PCR), restriction enzyme (RE) digestion and ligation followed by transformation and mini-prep purification, I have successfully obtained the ideal DNA plasmids for transfection. Later on, positively-transfected HEK-293T cells will be evaluated for HA expression and subjected to antibiotic (Zeocin) selection from which resistance is conferred by the transfecting plasmids.

Examining the Arrhythmogenicity of Dobutamine When Used in Conjunction with Isoflurane or Sevoflurane Emily Nieves, CURO Research Assistant Dr. Rachel Reed, Large Animal Medicine and Surgery, College of Veterinary Medicine Dobutamine is an inoptric agent typically administered to counteract the low cardiac output associated with isoflurane, sevoflurane, and other types of anesthesia, but has been known to cause arrhythmias as well. The increased risk of arrhythmias during surgery may lead to an increase of complications during surgery, as irregular heartbeats can mean decreased blood flow to vital organs. Previously, halothane was administered to maintain anesthesia, and was found to cause a significant number of arrhythmias when coupled with dobutamine. Since isoflurane and sevoflurane replaced halothane as a means of maintaining anesthesia, there have been few studies investigating the occurrence of arrhythmias when dobutamine is used in conjunction with isoflurane or sevoflurane. This experiment serves to bridge that gap in knowledge by examining the arrhythmogenicity of dobutamine when given to horses that have been anesthetized with either isoflurane or sevoflurane. This experiment was conducted as a retrospective study. The data was collected using anesthesia records from the UGA Veterinary Teaching Hospital. 200 horses were studied and variations in heart rate and other variables were recorded as well as any documentation of arrhythmias. It is expected that the occurrence of arrhythmias will be much lower in the horses studied than in the horses that were administered halothane in previous studies.

Archaeometry of Argentinean Rock Art Autumn Nobles, CURO Research Assistant Dr. Tina Salguero, Chemistry, Franklin College of Arts and Sciences From the famous Lascaux cave paintings in France to Cueva de las Manos in Argentina, naturally occurring pigments have been used as colorants since antiquity. The pigments used were typically composed of common minerals found in the region of the artist. The high availability of these inorganic compounds coupled with their high resistance against weathering made them a key ingredient in early artwork. The primary goal of this project is to identify the mineral composition of the pigments used in cave art samples from Santa Cruz, Patagonia and to compare them to local mineral sources. Studies on rock art pigments have been conducted in Argentina, but there have been few studies comparing these samples to the natural pigments to minerals found in the surrounding region. The

Facilitating the Continuous Expression and Secretion of the Influenza Surface Glycoprotein, Hemagglutinin, within Human Cells Santosh Nimkar, CURO Research Assistant Dr. Ted M Ross, Infectious Diseases, College of Veterinary Medicine Influenza is a viral infection that causes severe respiratory illnesses and, during epidemics, is responsible for 250,000 to 300,000 deaths per year worldwide (WHO). Due to antigenic shift and drift, many different antigenic combinations occur 175