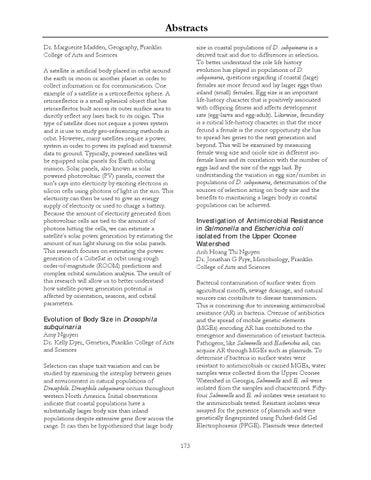 size in coastal populations of D. subquinaria is a derived trait and due to differences in selection. To better understand the role life history evolution has played in populations of D. subquinaria, questions regarding if coastal (large) females are more fecund and lay larger eggs than inland (small) females. Egg size is an important life-history character that is positively associated with offspring fitness and affects development rate (egg-larva and egg-adult). Likewise, fecundity is a critical life-history character in that the more fecund a female is the more opportunity she has to spread her genes to the next generation and beyond. This will be examined by measuring female wing size and oriole size in different isofemale lines and its correlation with the number of eggs laid and the size of the eggs laid. By understanding the variation in egg size/number in populations of D. subquinaria, determination of the sources of selection acting on body size and the benefits to maintaining a larger body in coastal populations can be achieved.

A satellite is artificial body placed in orbit around the earth or moon or another planet in order to collect information or for communication. One example of a satellite is a retroreflector sphere. A retroreflector is a small spherical object that has retroreflector built across its outer surface area to directly reflect any laser back to its origin. This type of satellite does not require a power system and it is use to study geo-referencing methods in orbit. However, many satellites require a power system in order to power its payload and transmit data to ground. Typically, powered satellites will be equipped solar panels for Earth orbiting mission. Solar panels, also known as solar powered photovoltaic (PV) panels, convert the sunâ&amp;#x20AC;&amp;#x2122;s rays into electricity by exciting electrons in silicon cells using photons of light in the sun. This electricity can then be used to give an energy supply of electricity or used to charge a battery. Because the amount of electricity generated from photovoltaic cells are tied to the amount of photons hitting the cells, we can estimate a satellite&#39;s solar power generation by estimating the amount of sun light shining on the solar panels. This research focuses on estimating the power generation of a CubeSat in orbit using rough order-of-magnitude (ROOM) predictions and complex orbital simulation analysis. The result of this research will allow us to better understand how satellite power generation potential is affected by orientation, seasons, and orbital parameters.

Investigation of Antimicrobial Resistance in Salmonella and Escherichia coli isolated from the Upper Oconee Watershed Anh Hoang Thi Nguyen Dr. Jonathan G Frye, Microbiology, Franklin College of Arts and Sciences Bacterial contamination of surface water from agricultural runoffs, sewage drainage, and natural sources can contribute to disease transmission. This is concerning due to increasing antimicrobial resistance (AR) in bacteria. Overuse of antibiotics and the spread of mobile genetic elements (MGEs) encoding AR has contributed to the emergence and dissemination of resistant bacteria. Pathogens, like Salmonella and Escherichia coli, can acquire AR through MGEs such as plasmids. To determine if bacteria in surface water were resistant to antimicrobials or carried MGEs, water samples were collected from the Upper Oconee Watershed in Georgia; Salmonella and E. coli were isolated from the samples and characterized. Fiftyfour Salmonella and E. coli isolates were resistant to the antimicrobials tested. Resistant isolates were assayed for the presence of plasmids and were genetically fingerprinted using Pulsed-field Gel Electrophoresis (PFGE). Plasmids were detected

Evolution of Body Size in Drosophila subquinaria Amy Nguyen Dr. Kelly Dyer, Genetics, Franklin College of Arts and Sciences Selection can shape trait variation and can be studied by examining the interplay between genes and environment in natural populations of Drosophila. Drosophila subquinaria occurs throughout western North America. Initial observations indicate that coastal populations have a substantially larger body size than inland populations despite extensive gene flow across the range. It can then be hypothesized that large body 173