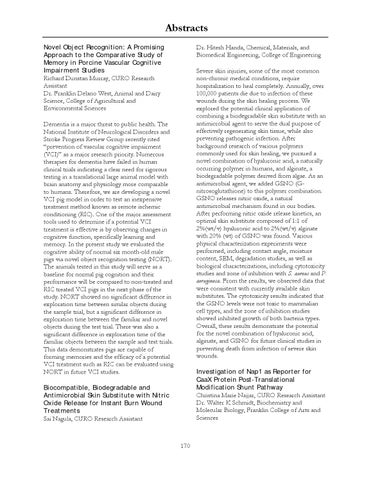 Severe skin injuries, some of the most common non-chronic medical conditions, require hospitalization to heal completely. Annually, over 100,000 patients die due to infection of these wounds during the skin healing process. We explored the potential clinical application of combining a biodegradable skin substitute with an antimicrobial agent to serve the dual purpose of effectively regenerating skin tissue, while also preventing pathogenic infection. After background research of various polymers commonly used for skin healing, we pursued a novel combination of hyaluronic acid, a naturally occurring polymer in humans, and alginate, a biodegradable polymer derived from algae. As an antimicrobial agent, we added GSNO (Gnitrosoglutathione) to this polymer combination. GSNO releases nitric oxide, a natural antimicrobial mechanism found in our bodies. After performing nitric oxide release kinetics, an optimal skin substitute composed of 1:1 of 2%(wt/v) hyaluronic acid to 2%(wt/v) alginate with 20% (wt) of GSNO was found. Various physical characterization experiments were performed, including contact angle, moisture content, SEM, degradation studies, as well as biological characterizations, including cytotoxicity studies and zone of inhibition with S. aureus and P. aeruginosa. From the results, we observed data that were consistent with currently available skin substitutes. The cytotoxicity results indicated that the GSNO levels were not toxic to mammalian cell types, and the zone of inhibition studies showed inhibited growth of both bacteria types. Overall, these results demonstrate the potential for the novel combination of hyaluronic acid, alginate, and GSNO for future clinical studies in preventing death from infection of severe skin wounds.

Dementia is a major threat to public health. The National Institute of Neurological Disorders and Stroke Progress Review Group recently cited â&amp;#x20AC;&amp;#x153;prevention of vascular cognitive impairment (VCI)â&amp;#x20AC;? as a major research priority. Numerous therapies for dementia have failed in human clinical trials indicating a clear need for rigorous testing in a translational large animal model with brain anatomy and physiology more comparable to humans. Therefore, we are developing a novel VCI pig model in order to test an inexpensive treatment method known as remote ischemic conditioning (RIC). One of the major assessment tools used to determine if a potential VCI treatment is effective is by observing changes in cognitive function, specifically learning and memory. In the present study we evaluated the cognitive ability of normal six month-old male pigs via novel object recognition testing (NORT). The animals tested in this study will serve as a baseline for normal pig cognition and their performance will be compared to non-treated and RIC treated VCI pigs in the next phase of the study. NORT showed no significant difference in exploration time between similar objects during the sample trial, but a significant difference in exploration time between the familiar and novel objects during the test trial. There was also a significant difference in exploration time of the familiar objects between the sample and test trials. This data demonstrates pigs are capable of forming memories and the efficacy of a potential VCI treatment such as RIC can be evaluated using NORT in future VCI studies.