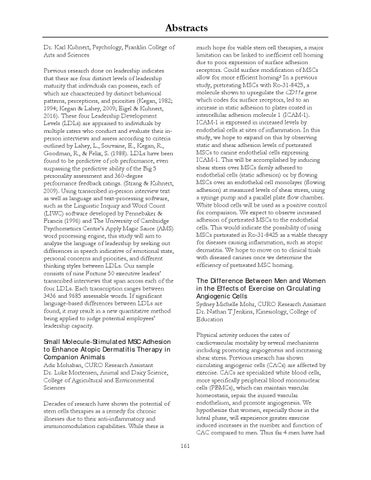 much hope for viable stem cell therapies, a major limitation can be linked to inefficient cell homing due to poor expression of surface adhesion receptors. Could surface modification of MSCs allow for more efficient homing? In a previous study, pretreating MSCs with Ro-31-8425, a molecule shown to upregulate the CD11a gene which codes for surface receptors, led to an increase in static adhesion to plates coated in intercellular adhesion molecule 1 (ICAM-1). ICAM-1 is expressed in increased levels by endothelial cells at sites of inflammation. In this study, we hope to expand on this by observing static and shear adhesion levels of pretreated MSCs to canine endothelial cells expressing ICAM-1. This will be accomplished by inducing shear stress over MSCs firmly adhered to endothelial cells (static adhesion) or by flowing MSCs over an endothelial cell monolayer (flowing adhesion) at measured levels of shear stress, using a syringe pump and a parallel plate flow chamber. White blood cells will be used as a positive control for comparison. We expect to observe increased adhesion of pretreated MSCs to the endothelial cells. This would indicate the possibility of using MSCs pretreated in Ro-31-8425 as a viable therapy for diseases causing inflammation, such as atopic dermatitis. We hope to move on to clinical trials with diseased canines once we determine the efficiency of pretreated MSC homing.

Previous research done on leadership indicates that there are four distinct levels of leadership maturity that individuals can possess, each of which are characterized by distinct behavioral patterns, perceptions, and priorities (Kegan, 1982; 1994; Kegan &amp; Lahey, 2009; Eigel &amp; Kuhnert, 2016). These four Leadership Development Levels (LDLs) are appraised to individuals by multiple raters who conduct and evaluate their inperson interviews and assess according to criteria outlined by Lahey, L., Souvaine, E., Kegan, R., Goodman, R., &amp; Felix, S. (1988). LDLs have been found to be predictive of job performance, even surpassing the predictive ability of the Big 5 personality assessment and 360-degree performance feedback ratings. (Strang &amp; Kuhnert, 2009). Using transcribed in-person interview text as well as language and text-processing software, such as the Linguistic Inquiry and Word Count (LIWC) software developed by Pennebaker &amp; Francis (1996) and The University of Cambridge Psychometrics Centre’s Apply Magic Sauce (AMS) word processing engine, this study will aim to analyze the language of leadership by seeking out differences in speech indicative of emotional state, personal concerns and priorities, and different thinking styles between LDLs. Our sample consists of nine Fortune 50 executive leaders’ transcribed interviews that span across each of the four LDLs. Each transcription ranges between 3436 and 9685 assessable words. If significant language-based differences between LDLs are found, it may result in a new quantitative method being applied to judge potential employees’ leadership capacity.

Small Molecule-Stimulated MSC Adhesion to Enhance Atopic Dermatitis Therapy in Companion Animals Adir Mohaban, CURO Research Assistant Dr. Luke Mortensen, Animal and Dairy Science, College of Agricultural and Environmental Sciences Decades of research have shown the potential of stem cells therapies as a remedy for chronic illnesses due to their anti-inflammatory and immunomodulation capabilities. While there is 161