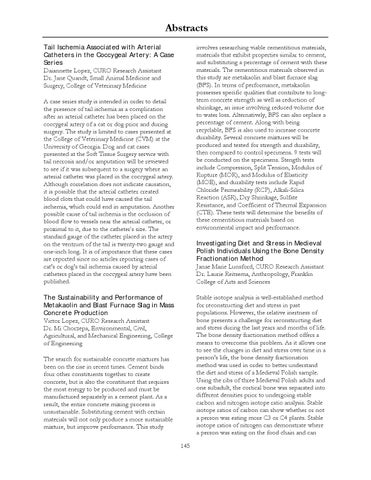 Abstracts involves researching viable cementitious materials, materials that exhibit properties similar to cement, and substituting a percentage of cement with these materials. The cementitious materials observed in this study are metakaolin and blast furnace slag (BFS). In terms of performance, metakaolin possesses specific qualities that contribute to longterm concrete strength as well as reduction of shrinkage, an issue involving reduced volume due to water loss. Alternatively, BFS can also replace a percentage of cement. Along with being recyclable, BFS is also used to increase concrete durability. Several concrete mixtures will be produced and tested for strength and durability, then compared to control specimens. 9 tests will be conducted on the specimens. Stength tests include Compression, Split Tension, Modulus of Rupture (MOR), and Modulus of Elasticity (MOE), and durability tests include Rapid Chloride Permeability (RCP), Alkali-Silica Reaction (ASR), Dry Shrinkage, Sulfate Resistance, and Coefficient of Thermal Expansion (CTE). These tests will determine the benefits of these cementitious materials based on environmental impact and performance.

Tail Ischemia Associated with Arterial Catheters in the Coccygeal Artery: A Case Series Daiannette Lopez, CURO Research Assistant Dr. Jane Quandt, Small Animal Medicine and Surgery, College of Veterinary Medicine A case series study is intended in order to detail the presence of tail ischemia as a complication after an arterial catheter has been placed on the coccygeal artery of a cat or dog prior and during surgery. The study is limited to cases presented at the College of Veterinary Medicine (CVM) at the University of Georgia. Dog and cat cases presented at the Soft Tissue Surgery service with tail necrosis and/or amputation will be reviewed to see if it was subsequent to a surgery where an arterial catheter was placed in the coccygeal artery. Although correlation does not indicate causation, it is possible that the arterial catheter created blood clots that could have caused the tail ischemia, which could end in amputation. Another possible cause of tail ischemia is the occlusion of blood flow to vessels near the arterial catheter, or proximal to it, due to the catheter&#39;s size. The standard gauge of the catheter placed in the artery on the ventrum of the tail is twenty-two gauge and one-inch long. It is of importance that these cases are reported since no articles reporting cases of catâ&amp;#x20AC;&amp;#x2122;s or dogâ&amp;#x20AC;&amp;#x2122;s tail ischemia caused by arterial catheters placed in the coccygeal artery have been published.

Investigating Diet and Stress in Medieval Polish Individuals Using the Bone Density Fractionation Method Janae Marie Lunsford, CURO Research Assistant Dr. Laurie Reitsema, Anthropology, Franklin College of Arts and Sciences Stable isotope analysis is well-established method for reconstructing diet and stress in past populations. However, the relative inertness of bone presents a challenge for reconstructing diet and stress during the last years and months of life. The bone density fractionation method offers a means to overcome this problem. As it allows one to see the changes in diet and stress over time in a personâ&amp;#x20AC;&amp;#x2122;s life, the bone density fractionation method was used in order to better understand the diet and stress of a Medieval Polish sample. Using the ribs of three Medieval Polish adults and one subadult, the cortical bone was separated into different densities prior to undergoing stable carbon and nitrogen isotope ratio analysis. Stable isotope ratios of carbon can show whether or not a person was eating more C3 or C4 plants. Stable isotope ratios of nitrogen can demonstrate where a person was eating on the food chain and can

The Sustainability and Performance of Metakaolin and Blast Furnace Slag in Mass Concrete Production Victor Lopez, CURO Research Assistant Dr. Mi Chorzepa, Environmental, Civil, Agricultural, and Mechanical Engineering, College of Engineering The search for sustainable concrete mixtures has been on the rise in recent times. Cement binds four other constituents together to create concrete, but is also the constituent that requires the most energy to be produced and must be manufactured separately in a cement plant. As a result, the entire concrete mixing process is unsustainable. Substituting cement with certain materials will not only produce a more sustainable mixture, but improve performance. This study 145