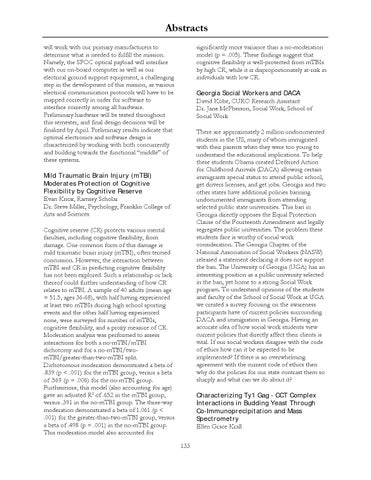 Abstracts will work with our primary manufacturers to determine what is needed to fulfill the mission. Namely, the SPOC optical payload will interface with our on-board computer as well as our electrical ground support equipment, a challenging step in the development of this mission, as various electrical communication protocols will have to be mapped correctly in order for software to interface correctly among all hardware. Preliminary hardware will be tested throughout this semester, and final design decisions will be finalized by April. Preliminary results indicate that optimal electronics and software design is characterized by working with both concurrently and building towards the functional â&amp;#x20AC;&amp;#x153;middleâ&amp;#x20AC;? of these systems.

significantly more variance than a no-moderation model (p = .005). These findings suggest that cognitive flexibility is well-protected from mTBIs by high CR, while it is disproportionately at-risk in individuals with low CR. Georgia Social Workers and DACA David Kobe, CURO Research Assistant Dr. Jane McPherson, Social Work, School of Social Work There are approximately 2 million undocumented students in the US, many of whom immigrated with their parents when they were too young to understand the educational implications. To help these students Obama created Deferred Action for Childhood Arrivals (DACA) allowing certain immigrants special status to attend public school, get drivers licenses, and get jobs. Georgia and two other states have additional policies banning undocumented immigrants from attending selected public state universities. This ban in Georgia directly opposes the Equal Protection Clause of the Fourteenth Amendment and legally segregates public universities. The problem these students face is worthy of social work consideration. The Georgia Chapter of the National Association of Social Workers (NASW) released a statement declaring it does not support the ban. The University of Georgia (UGA) has an interesting position as a public university selected in the ban, yet home to a strong Social Work program. To understand opinions of the students and faculty of the School of Social Work at UGA we created a survey focusing on the awareness participants have of current policies surrounding DACA and immigration in Georgia. Having an accurate idea of how social work students view current policies that directly affect their clients is vital. If our social workers disagree with the code of ethics how can it be expected to be implemented? If there is an overwhelming agreement with the current code of ethics then why do the policies for our state contrast them so sharply and what can we do about it?

Mild Traumatic Brain Injury (mTBI) Moderates Protection of Cognitive Flexibility by Cognitive Reserve Evan Knox, Ramsey Scholar Dr. Steve Miller, Psychology, Franklin College of Arts and Sciences Cognitive reserve (CR) protects various mental faculties, including cognitive flexibility, from damage. One common form of this damage is mild traumatic brain injury (mTBI), often termed concussion. However, the interaction between mTBI and CR in predicting cognitive flexibility has not been explored. Such a relationship or lack thereof could further understanding of how CR relates to mTBI. A sample of 40 adults (mean age = 51.5, ages 36-68), with half having experienced at least two mTBIs during high school sporting events and the other half having experienced none, were surveyed for number of mTBIs, cognitive flexibility, and a proxy measure of CR. Moderation analysis was performed to assess interactions for both a no-mTBI/mTBI dichotomy and for a no-mTBI/twomTBI/greater-than-two-mTBI split. Dichotomous moderation demonstrated a beta of .839 (p &lt; .001) for the mTBI group, versus a beta of .569 (p = .006) for the no-mTBI group. Furthermore, this model (also accounting for age) gave an adjusted R2 of .652 in the mTBI group, versus .391 in the no-mTBI group. The three-way moderation demonstrated a beta of 1.061 (p &lt; .001) for the greater-than-two-mTBI group, versus a beta of .498 (p = .001) in the no-mTBI group. This moderation model also accounted for