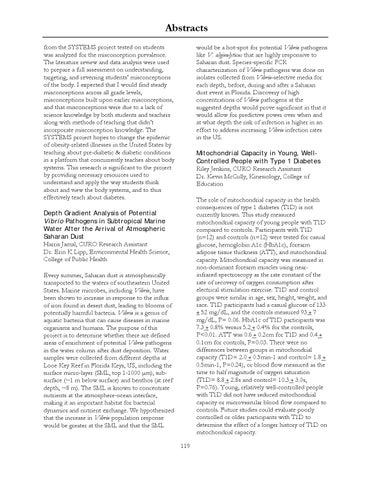 Abstracts from the SYSTEMS project tested on students was analyzed for the misconception prevalence. The literature review and data analysis were used to prepare a full assessment on understanding, targeting, and reversing students’ misconceptions of the body. I expected that I would find steady misconceptions across all grade levels, misconceptions built upon earlier misconceptions, and that misconceptions were due to a lack of science knowledge by both students and teachers along with methods of teaching that didn’t incorporate misconception knowledge. The SYSTEMS project hopes to change the epidemic of obesity-related illnesses in the United States by teaching about pre-diabetic &amp; diabetic conditions in a platform that concurrently teaches about body systems. This research is significant to the project by providing necessary resources used to understand and apply the way students think about and view the body systems, and to thus effectively teach about diabetes.

would be a hot-spot for potential Vibrio pathogens like V. alginolyticus that are highly responsive to Saharan dust. Species-specific PCR characterization of Vibrio pathogens was done on isolates collected from Vibrio-selective media for each depth, before, during and after a Saharan dust event in Florida. Discovery of high concentrations of Vibrio pathogens at the suggested depths would prove significant in that it would allow for predictive power over when and at what depth the risk of infection is higher in an effort to address increasing Vibrio infection rates in the US. Mitochondrial Capacity in Young, WellControlled People with Type 1 Diabetes Riley Jenkins, CURO Research Assistant Dr. Kevin McCully, Kinesiology, College of Education The role of mitochondrial capacity in the health consequences of type 1 diabetes (T1D) is not currently known. This study measured mitochondrial capacity of young people with T1D compared to controls. Participants with T1D (n=12) and controls (n=12) were tested for casual glucose, hemoglobin A1c (HbA1c), forearm adipose tissue thickness (ATT), and mitochondrial capacity. Mitochondrial capacity was measured in non-dominant forearm muscles using nearinfrared spectroscopy as the rate constant of the rate of recovery of oxygen consumption after electrical stimulation exercise. T1D and control groups were similar in age, sex, height, weight, and race. T1D participants had a casual glucose of 133 + 52 mg/dL, and the controls measured 93 + 7 mg/dL, P= 0.06. HbA1c of T1D participants was 7.3 + 0.8% versus 5.2 + 0.4% for the controls, P&lt;0.01. ATT was 0.6 + 0.2cm for T1D and 0.4 + 0.1cm for controls, P=0.03. There were no differences between groups in mitochondrial capacity (T1D= 2.0 + 0.5min-1 and control= 1.8 + 0.5min-1, P=0.24), or blood flow measured as the time to half magnitude of oxygen saturation (T1D= 8.8 + 2.8s and control= 10.3 + 3.0s, P=0.76). Young, relatively well-controlled people with T1D did not have reduced mitochondrial capacity or microvascular blood flow compared to controls. Future studies could evaluate poorly controlled or older participants with T1D to determine the effect of a longer history of T1D on mitochondrial capacity.

Depth Gradient Analysis of Potential Vibrio Pathogens in Subtropical Marine Water After the Arrival of Atmospheric Saharan Dust Harris Jamal, CURO Research Assistant Dr. Erin K Lipp, Environmental Health Science, College of Public Health Every summer, Saharan dust is atmospherically transported to the waters of southeastern United States. Marine microbes, including Vibrio, have been shown to increase in response to the influx of iron found in desert dust, leading to blooms of potentially harmful bacteria. Vibrio is a genus of aquatic bacteria that can cause diseases in marine organisms and humans. The purpose of this project is to determine whether there are defined areas of enrichment of potential Vibrio pathogens in the water column after dust deposition. Water samples were collected from different depths at Looe Key Reef in Florida Keys, US, including the surface micro-layer (SML, top 1-1000 μm), subsurface (~1 m below surface) and benthos (at reef depth, ~8 m). The SML is known to concentrate nutrients at the atmosphere-ocean interface, making it an important habitat for bacterial dynamics and nutrient exchange. We hypothesized that the increase in Vibrio population response would be greater at the SML and that the SML 119