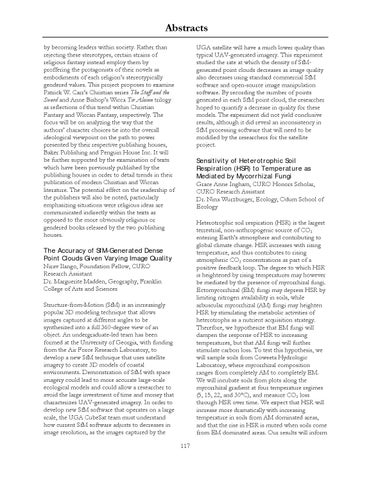 Abstracts by becoming leaders within society. Rather than rejecting these stereotypes, certain strains of religious fantasy instead employ them by proffering the protagonists of their novels as embodiments of each religion’s stereotypically gendered values. This project proposes to examine Patrick W. Carr’s Christian series The Staff and the Sword and Anne Bishop’s Wicca Tir Alainn trilogy as reflections of this trend within Christian Fantasy and Wiccan Fantasy, respectively. The focus will be on analyzing the way that the authors’ character choices tie into the overall ideological viewpoint on the path to power presented by their respective publishing houses, Baker Publishing and Penguin House Inc. It will be further supported by the examination of texts which have been previously published by the publishing houses in order to detail trends in their publication of modern Christian and Wiccan literature. The potential effect on the readership of the publishers will also be noted, particularly emphasizing situations were religious ideas are communicated indirectly within the texts as opposed to the more obviously religious or gendered books released by the two publishing houses.

UGA satellite will have a much lower quality than typical UAV-generated imagery. This experiment studied the rate at which the density of SfMgenerated point clouds decreases as image quality also decreases using standard commercial SfM software and open-source image manipulation software. By recording the number of points generated in each SfM point cloud, the researcher hoped to quantify a decrease in quality for these models. The experiment did not yield conclusive results, although it did reveal an inconsistency in SfM processing software that will need to be modified by the researchers for the satellite project. Sensitivity of Heterotrophic Soil Respiration (HSR) to Temperature as Mediated by Mycorrhizal Fungi Grace Anne Ingham, CURO Honors Scholar, CURO Research Assistant Dr. Nina Wurzburger, Ecology, Odum School of Ecology Heterotrophic soil respiration (HSR) is the largest terrestrial, non-anthropogenic source of CO2 entering Earth’s atmosphere and contributing to global climate change. HSR increases with rising temperature, and thus contributes to rising atmospheric CO2 concentrations as part of a positive feedback loop. The degree to which HSR is heightened by rising temperatures may however be mediated by the presence of mycorrhizal fungi. Ectomycorrhizal (EM) fungi may depress HSR by limiting nitrogen availability in soils, while arbuscular mycorrhizal (AM) fungi may heighten HSR by stimulating the metabolic activities of heterotrophs as a nutrient acquisition strategy. Therefore, we hypothesize that EM fungi will dampen the response of HSR to increasing temperatures, but that AM fungi will further stimulate carbon loss. To test this hypothesis, we will sample soils from Coweeta Hydrologic Laboratory, where mycorrhizal composition ranges from completely AM to completely EM. We will incubate soils from plots along the mycorrhizal gradient at four temperature regimes (5, 15, 22, and 30°C), and measure CO2 loss through HSR over time. We expect that HSR will increase more dramatically with increasing temperature in soils from AM dominated areas, and that the rise in HSR is muted when soils come from EM dominated areas. Our results will inform

The Accuracy of SfM-Generated Dense Point Clouds Given Varying Image Quality Nirav Ilango, Foundation Fellow, CURO Research Assistant Dr. Marguerite Madden, Geography, Franklin College of Arts and Sciences Structure-from-Motion (SfM) is an increasingly popular 3D modeling technique that allows images captured at different angles to be synthesized into a full 360-degree view of an object. An undergraduate-led team has been formed at the University of Georgia, with funding from the Air Force Research Laboratory, to develop a new SfM technique that uses satellite imagery to create 3D models of coastal environments. Demonstration of SfM with space imagery could lead to more accurate large-scale ecological models and could allow a researcher to avoid the large investment of time and money that characterizes UAV-generated imagery. In order to develop new SfM software that operates on a large scale, the UGA CubeSat team must understand how current SfM software adjusts to decreases in image resolution, as the images captured by the 117