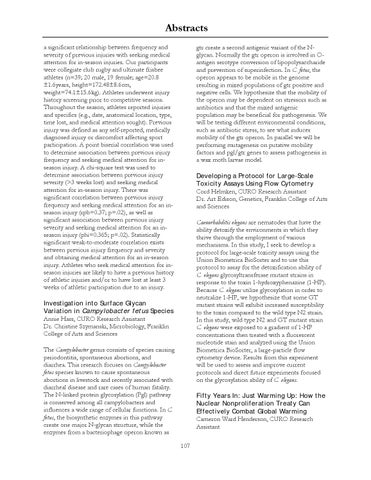 gtr create a second antigenic variant of the Nglycan. Normally the gtr operon is involved in Oantigen serotype conversion of lipopolysaccharide and prevention of superinfection. In C. fetus, the operon appears to be mobile in the genome resulting in mixed populations of gtr positive and negative cells. We hypothesize that the mobility of the operon may be dependent on stressors such as antibiotics and that the mixed antigenic population may be beneficial for pathogenesis. We will be testing different environmental conditions, such as antibiotic stress, to see what induces mobility of the gtr operon. In parallel we will be performing mutagenesis on putative mobility factors and pgl/gtr genes to assess pathogenesis in a wax moth larvae model. Developing a Protocol for Large-Scale Toxicity Assays Using Flow Cytometry Cord Helmken, CURO Research Assistant Dr. Art Edison, Genetics, Franklin College of Arts and Sciences Caenorhabditis elegans are nematodes that have the ability detoxify the environments in which they thrive through the employment of various mechanisms. In this study, I seek to develop a protocol for large-scale toxicity assays using the Union Biometrica BioSorter and to use this protocol to assay for the detoxification ability of C. elegans glycosyltransferase mutant strains in response to the toxin 1-hydroxyphenazine (1-HP). Because C. elegans utilize glycosylation in order to neutralize 1-HP, we hypothesize that some GT mutant strains will exhibit increased susceptibility to the toxin compared to the wild type N2 strain. In this study, wild type N2 and GT mutant strain C. elegans were exposed to a gradient of 1-HP concentrations then treated with a fluorescent nucleotide stain and analyzed using the Union Biometrica BioSorter, a large-particle flow cytometry device. Results from this experiment will be used to assess and improve current protocols and direct future experiments focused on the glycosylation ability of C. elegans.

Investigation into Surface Glycan Variation in Campylobacter fetus Species Annie Hass, CURO Research Assistant Dr. Christine Szymanski, Microbiology, Franklin College of Arts and Sciences The Campylobacter genus consists of species causing periodontitis, spontaneous abortions, and diarrhea. This research focuses on Campylobacter fetus species known to cause spontaneous abortions in livestock and recently associated with diarrheal disease and rare cases of human fatality. The N-linked protein glycosylation (Pgl) pathway is conserved among all campylobacters and influences a wide range of cellular functions. In C. fetus, the biosynthetic enzymes in this pathway create one major N-glycan structure, while the enzymes from a bacteriophage operon known as