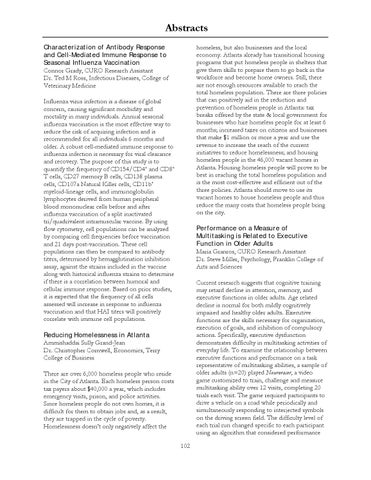 Characterization of Antibody Response and Cell-Mediated Immune Response to Seasonal Influenza Vaccination Connor Grady, CURO Research Assistant Dr. Ted M Ross, Infectious Diseases, College of Veterinary Medicine Influenza virus infection is a disease of global concern, causing significant morbidity and mortality in many individuals. Annual seasonal influenza vaccination is the most effective way to reduce the risk of acquiring infection and is recommended for all individuals 6 months and older. A robust cell-mediated immune response to influenza infection is necessary for viral clearance and recovery. The purpose of this study is to quantify the frequency of CD154/CD4+ and CD8+ T cells, CD27 memory B cells, CD138 plasma cells, CD107a Natural Killer cells, CD11b+ myeloid-lineage cells, and immunoglobulin lymphocytes derived from human peripheral blood mononuclear cells before and after influenza vaccination of a split inactivated tri/quadrivalent intramuscular vaccine. By using flow cytometry, cell populations can be analyzed by comparing cell frequencies before vaccination and 21 days post-vaccination. These cell populations can then be compared to antibody titers, determined by hemagglutination inhibition assay, against the strains included in the vaccine along with historical influenza strains to determine if there is a correlation between humoral and cellular immune response. Based on prior studies, it is expected that the frequency of all cells assessed will increase in response to influenza vaccination and that HAI titers will positively correlate with immune cell populations.

Performance on a Measure of Multitasking is Related to Executive Function in Older Adults Maria Granros, CURO Research Assistant Dr. Steve Miller, Psychology, Franklin College of Arts and Sciences Current research suggests that cognitive training may retard decline in attention, memory, and executive functions in older adults. Age related decline is normal for both mildly cognitively impaired and healthy older adults. Executive functions are the skills necessary for organization, execution of goals, and inhibition of compulsory actions. Specifically, executive dysfunction demonstrates difficulty in multitasking activities of everyday life. To examine the relationship between executive functions and performance on a task representative of multitasking abilities, a sample of older adults (n=20) played Neuroracer, a video game customized to train, challenge and measure multitasking ability over 12 visits, completing 20 trials each visit. The game required participants to drive a vehicle on a road while periodically and simultaneously responding to interjected symbols on the driving screen field. The difficulty level of each trial run changed specific to each participant using an algorithm that considered performance

Reducing Homelessness in Atlanta Ammishaddai Sully Grand-Jean Dr. Christopher Cornwell, Economics, Terry College of Business There are over 6,000 homeless people who reside in the City of Atlanta. Each homeless person costs tax payers about $40,000 a year, which includes emergency visits, prison, and police activities. Since homeless people do not own homes, it is difficult for them to obtain jobs and, as a result, they are trapped in the cycle of poverty. Homelessness doesnâ&amp;#x20AC;&amp;#x2122;t only negatively affect the 102