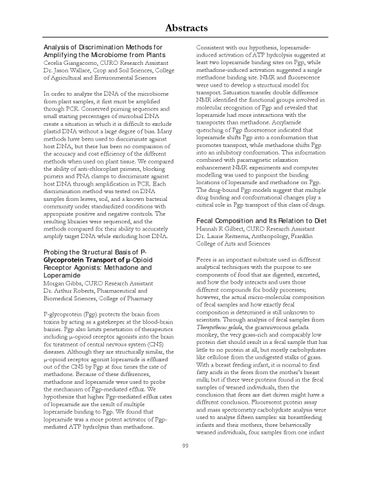 Abstracts Consistent with our hypothesis, loperamideinduced activation of ATP hydrolysis suggested at least two loperamide binding sites on Pgp, while methadone-induced activation suggested a single methadone binding site. NMR and fluorescence were used to develop a structural model for transport. Saturation transfer double difference NMR identified the functional groups involved in molecular recognition of Pgp and revealed that loperamide had more interactions with the transporter than methadone. Acrylamide quenching of Pgp fluorescence indicated that loperamide shifts Pgp into a conformation that promotes transport, while methadone shifts Pgp into an inhibitory conformation. This information combined with paramagnetic relaxation enhancement NMR experiments and computer modelling was used to pinpoint the binding locations of loperamide and methadone on Pgp. The drug-bound Pgp models suggest that multiple drug binding and conformational changes play a critical role in Pgp transport of this class of drugs.

Analysis of Discrimination Methods for Amplifying the Microbiome from Plants Cecelia Giangacomo, CURO Research Assistant Dr. Jason Wallace, Crop and Soil Sciences, College of Agricultural and Environmental Sciences In order to analyze the DNA of the microbiome from plant samples, it first must be amplified through PCR. Conserved priming sequences and small starting percentages of microbial DNA create a situation in which it is difficult to exclude plastid DNA without a large degree of bias. Many methods have been used to discriminate against host DNA, but there has been no comparison of the accuracy and cost efficiency of the different methods when used on plant tissue. We compared the ability of anti-chloroplast primers, blocking primers and PNA clamps to discriminate against host DNA through amplification in PCR. Each discrimination method was tested on DNA samples from leaves, soil, and a known bacterial community under standardized conditions with appropriate positive and negative controls. The resulting libraries were sequenced, and the methods compared for their ability to accurately amplify target DNA while excluding host DNA.

Feces is an important substrate used in different analytical techniques with the purpose to see components of food that are digested, excreted, and how the body interacts and uses those different compounds for bodily processes; however, the actual micro-molecular composition of fecal samples and how exactly fecal composition is determined is still unknown to scientists. Through analysis of fecal samples from Theropithecus gelada, the gramnivorous gelada monkey, the very grass-rich and comparably low protein diet should result in a fecal sample that has little to no protein at all, but mostly carbohydrates like cellulose from the undigested stalks of grass. With a breast feeding infant, it is normal to find fatty acids in the feces from the mother’s breast milk; but if there were proteins found in the fecal samples of weaned individuals, then the conclusion that feces are diet driven might have a different conclusion. Fluorescent protein assay and mass spectrometry carbohydrate analysis were used to analyse fifteen samples: six breastfeeding infants and their mothers, three behaviorally weaned individuals, four samples from one infant

P-glycoprotein (Pgp) protects the brain from toxins by acting as a gatekeeper at the blood-brain barrier. Pgp also limits penetration of therapeutics including μ-opioid receptor agonists into the brain for treatment of central nervous system (CNS) diseases. Although they are structurally similar, the μ-opioid receptor agonist loperamide is effluxed out of the CNS by Pgp at four times the rate of methadone. Because of these differences, methadone and loperamide were used to probe the mechanism of Pgp-mediated efflux. We hypothesize that higher Pgp-mediated efflux rates of loperamide are the result of multiple loperamide binding to Pgp. We found that loperamide was a more potent activator of Pgpmediated ATP hydrolysis than methadone. 99