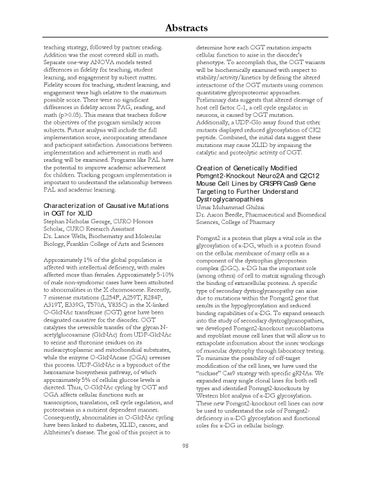 Abstracts teaching strategy, followed by partner reading. Addition was the most covered skill in math. Separate one-way ANOVA models tested differences in fidelity for teaching, student learning, and engagement by subject matter. Fidelity scores for teaching, student learning, and engagement were high relative to the maximum possible score. There were no significant differences in fidelity across PAG, reading, and math (p&gt;0.05). This means that teachers follow the objectives of the program similarly across subjects. Future analysis will include the full implementation score, incorporating attendance and participant satisfaction. Associations between implementation and achievement in math and reading will be examined. Programs like PAL have the potential to improve academic achievement for children. Tracking program implementation is important to understand the relationship between PAL and academic learning.

determine how each OGT mutation impacts cellular function to arise in the disorder’s phenotype. To accomplish this, the OGT variants will be biochemically examined with respect to stability/activity/kinetics by defining the altered interactome of the OGT mutants using common quantitative glycoproteomic approaches. Preliminary data suggests that altered cleavage of host cell factor C-1, a cell cycle regulator in neurons, is caused by OGT mutation. Additionally, a UDP-Glo assay found that other mutants displayed reduced glycosylation of CK2 peptide. Combined, the initial data suggest these mutations may cause XLID by impairing the catalytic and proteolytic activity of OGT. Creation of Genetically Modified Pomgnt2-Knockout Neuro2A and C2C12 Mouse Cell Lines by CRISPR/Cas9 Gene Targeting to Further Understand Dystroglycanopathies Umar Muhammad Ghilzai Dr. Aaron Beedle, Pharmaceutical and Biomedical Sciences, College of Pharmacy

Pomgnt2 is a protein that plays a vital role in the glycosylation of α-DG, which is a protein found on the cellular membrane of many cells as a component of the dystrophin glycoprotein complex (DGC). α-DG has the important role (among others) of cell to matrix signaling through the binding of extracellular proteins. A specific type of secondary dystroglycanopathy can arise due to mutations within the Pomgnt2 gene that results in the hypoglycosylation and reduced binding capabilities of α-DG. To expand research into the study of secondary dystroglycanopathies, we developed Pomgnt2-knockout neuroblastoma and myoblast mouse cell lines that will allow us to extrapolate information about the inner workings of muscular dystrophy through laboratory testing. To minimize the possibility of off-target modification of the cell lines, we have used the “nickase” Cas9 strategy with specific gRNAs. We expanded many single clonal lines for both cell types and identified Pomngt2-knockouts by Western blot analysis of α-DG glycosylation. These new Pomgnt2-knockout cell lines can now be used to understand the role of Pomgnt2deficiency in α-DG glycosylation and functional roles for α-DG in cellular biology.

Approximately 1% of the global population is affected with intellectual deficiency, with males affected more than females. Approximately 5-10% of male non-syndromic cases have been attributed to abnormalities in the X chromosome. Recently, 7 missense mutations (L254F, A259T, R284P, A319T, E339G, T570A, Y835C) in the X-linked O-GlcNAc transferase (OGT) gene have been designated causative for the disorder. OGT catalyzes the reversible transfer of the glycan Nacetylglucosamine (GlcNAc) from UDP-GlcNAc to serine and threonine residues on its nuclearcytoplasmic and mitochondrial substrates, while the enzyme O-GlcNAcase (OGA) reverses this process. UDP-GlcNAc is a byproduct of the hexosamine biosynthesis pathway, of which approximately 5% of cellular glucose levels is directed. Thus, O-GlcNAc cycling by OGT and OGA affects cellular functions such as transcription, translation, cell cycle regulation, and proteostasis in a nutrient dependent manner. Consequently, abnormalities in O-GlcNAc cycling have been linked to diabetes, XLID, cancer, and Alzheimer’s disease. The goal of this project is to 98