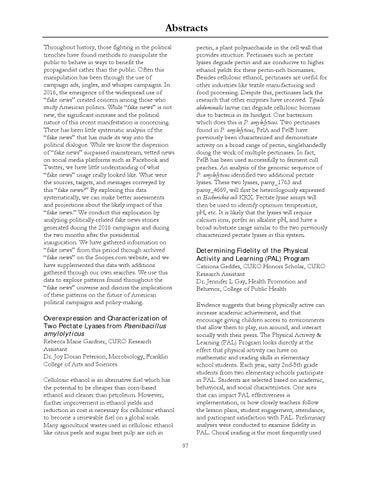 Abstracts Throughout history, those fighting in the political trenches have found methods to manipulate the public to behave in ways to benefit the propagandist rather than the public. Often this manipulation has been through the use of campaign ads, jingles, and whisper campaigns. In 2016, the emergence of the widespread use of “fake news” created concern among those who study American politics. While “fake news” is not new, the significant increase and the political nature of this recent manifestation is concerning. There has been little systematic analysis of the “fake news” that has made its way into the political dialogue. While we know the dispersion of “fake news” surpassed mainstream, vetted news on social media platforms such as Facebook and Twitter, we have little understanding of what “fake news” usage really looked like. What were the sources, targets, and messages conveyed by this “fake news?” By exploring this data systematically, we can make better assessments and projections about the likely impact of this “fake news.” We conduct this exploration by analyzing politically-related fake news stories generated during the 2016 campaigns and during the two months after the presidential inauguration. We have gathered information on “fake news” from this period through archived “fake news” on the Snopes.com website, and we have supplemented this data with additions gathered through our own searches. We use this data to explore patterns found throughout the “fake news” universe and discuss the implications of these patterns on the future of American political campaigns and policy-making.

pectin, a plant polysaccharide in the cell wall that provides structure. Pectinases such as pectate lyases degrade pectin and are conducive to higher ethanol yields for these pectin-rich biomasses. Besides cellulosic ethanol, pectinases are useful for other industries like textile manufacturing and food processing. Despite this, pectinases lack the research that other enzymes have received. Tipula abdominalis larvae can degrade cellulosic biomass due to bacteria in its hindgut. One bacterium which does this is P. amylolyticus. Two pectinases found in P. amylolyticus, PelA and PelB have previously been characterized and demonstrate activity on a broad range of pectin, singlehandedly doing the work of multiple pectinases. In fact, PelB has been used successfully to ferment cull peaches. An analysis of the genomic sequence of P. amylolyticus identified two additional pectate lyases. These two lyases, pamy_1763 and pamy_4669, will first be heterologously expressed in Escherichia coli KRX. Pectate lyase assays will then be used to identify optimum temperature, pH, etc. It is likely that the lyases will require calcium ions, prefer an alkaline pH, and have a broad substrate range similar to the two previously characterized pectate lyases in this system. Determining Fidelity of the Physical Activity and Learning (PAL) Program Catriona Geddes, CURO Honors Scholar, CURO Research Assistant Dr. Jennifer L Gay, Health Promotion and Behavior, College of Public Health Evidence suggests that being physically active can increase academic achievement, and that encourage giving children access to environments that allow them to play, run around, and interact socially with their peers. The Physical Activity &amp; Learning (PAL) Program looks directly at the effect that physical activity can have on mathematic and reading skills in elementary school students. Each year, sixty 2nd-5th grade students from two elementary schools participate in PAL. Students are selected based on academic, behavioral, and social characteristics. One area that can impact PAL effectiveness is implementation, or how closely teachers follow the lesson plans, student engagement, attendance, and participant satisfaction with PAL. Preliminary analyses were conducted to examine fidelity in PAL. Choral reading is the most frequently used

Overexpression and Characterization of Two Pectate Lyases from Paenibacillus amylolyticus Rebecca Marie Gardner, CURO Research Assistant Dr. Joy Doran Peterson, Microbiology, Franklin College of Arts and Sciences Cellulosic ethanol is an alternative fuel which has the potential to be cheaper than corn-based ethanol and cleaner than petroleum. However, further improvement in ethanol yields and reduction in cost is necessary for cellulosic ethanol to become a renewable fuel on a global scale. Many agricultural wastes used in cellulosic ethanol like citrus peels and sugar beet pulp are rich in 97