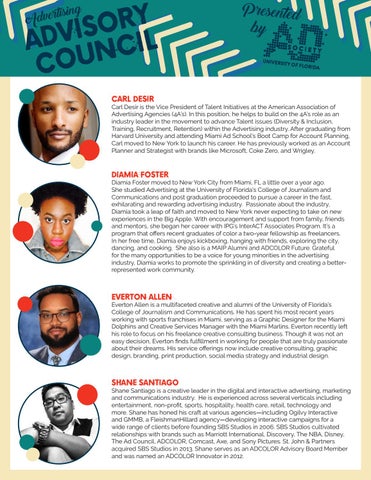 Carl Desir Carl Desir is the Vice President of Talent Initiatives at the American Association of Advertising Agencies (4A’s). In this position, he helps to build on the 4A’s role as an industry leader in the movement to advance Talent issues (Diversity & Inclusion, Training, Recruitment, Retention) within the Advertising industry. After graduating from Harvard University and attending Miami Ad School’s Boot Camp for Account Planning, Carl moved to New York to launch his career. He has previously worked as an Account Planner and Strategist with brands like Microsoft, Coke Zero, and Wrigley.

Diamia Foster Diamia Foster moved to New York City from Miami, FL a little over a year ago. She studied Advertising at the University of Florida’s College of Journalism and Communications and post graduation proceeded to pursue a career in the fast, exhilarating and rewarding advertising industry. Passionate about the industry, Diamia took a leap of faith and moved to New York never expecting to take on new experiences in the Big Apple. With encouragement and support from family, friends and mentors, she began her career with IPG’s InterACT Associates Program. It’s a program that offers recent graduates of color a two-year fellowship as freelancers. In her free time, Diamia enjoys kickboxing, hanging with friends, exploring the city, dancing, and cooking. She also is a MAIP Alumni and ADCOLOR Future. Grateful for the many opportunities to be a voice for young minorities in the advertising industry, Diamia works to promote the sprinkling in of diversity and creating a betterrepresented work community.

Everton Allen Everton Allen is a multifaceted creative and alumni of the University of Florida’s College of Journalism and Communications. He has spent his most recent years working with sports franchises in Miami, serving as a Graphic Designer for the Miami Dolphins and Creative Services Manager with the Miami Marlins. Everton recently left his role to focus on his freelance creative consulting business. Though it was not an easy decision, Everton finds fulfillment in working for people that are truly passionate about their dreams. His service offerings now include creative consulting, graphic design, branding, print production, social media strategy and industrial design.

Shane Santiago Shane Santiago is a creative leader in the digital and interactive advertising, marketing and communications industry. He is experienced across several verticals including entertainment, non-profit, sports, hospitality, health care, retail, technology and more. Shane has honed his craft at various agencies—including Ogilvy Interactive and GMMB, a FleishmanHillard agency—developing interactive campaigns for a wide range of clients before founding SBS Studios in 2006. SBS Studios cultivated relationships with brands such as Marriott International, Discovery, The NBA, Disney, The Ad Council, ADCOLOR, Comcast, Axe, and Sony Pictures. St. John & Partners acquired SBS Studios in 2013. Shane serves as an ADCOLOR Advisory Board Member and was named an ADCOLOR Innovator in 2012.