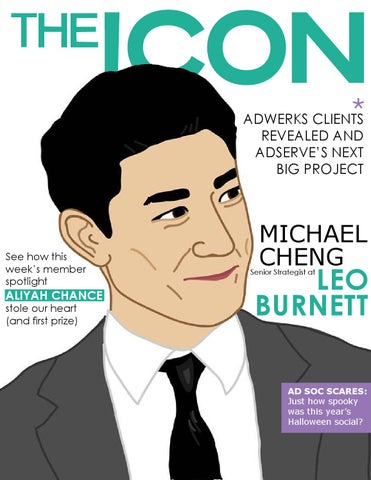 See how this week’s member spotlight

For months, not even our executive board knew who would be AdWerks’ clients this year. However, the wait is finally over. Balance 180, 3AM, Pleasant Cyclery, and The Warehouse are about to get werked, and The Icon will be the first to show you the amazing products each team creates as the fall and spring semesters unfolds. Meanwhile, Adserve, as usual, is keeping busy as well. Next Sunday, November 16th, you could join their Gators March for Babies team on the walk to raise money to prevent premature births. Make sure to reach out to Brianne Goller to see how you can be a part of the cause and look out for more info on how to donate to the Ad Society team.

Member Spotlight: Aliyah Chance Aliyah Chance is artsy – she dabbles in every medium she can, from acting to singing to sketching to painting. She’s a second year advertising major, but she plans to minor in both studio art and costume design. Her artistic background will serve her well in her future field of fashion or film, where she hopes to help with the more technical aspects of the industry. Her favorite current ad campaign includes the Beats by Dre commercial featuring Colin Kaepernick’s “Hear What You Want.” Although she’s from West Palm Beach, Aliyah loves to travel outside of Florida. She’s been to Jamaica, Italy and England, and she wants to visit more cities and eventually end up in one. Cities are all about meeting new people and networking (like Ad Society!), and that’s what Aliyah does best. She’s been to every meeting and just about every event – and she even won the Halloween costume contest! Keep it up, Aliyah!

Michael Cheng is currently a Senior Strategist at Leo Burnett who graduated from UF in 2011 and grew up in Orlando. Soon after graduating with his degree in advertising, he moved to Chicago (drawn by the warm winters) and started working at Y&R as assistant account executive. After realizing his poor organizational skills would not translate to a fruitful career on the account side, he found his true fit and transferred over to the strategy department. While at Y&R, he worked with numerous clients, mainly the BMO Harris Bank and Barilla Pasta brands. In 2013, he moved over to Leo Burnett to work on Firestone and Fifth Third Bank, but has also helped out on projects across other brands, like Samsung and Kellogg’s.

Be sure to tweet @UFAdSociety using #captioncontest. A winner will be announced at the end of the meeting and get a prize!

Head over to Tijuana Flats for and after meeting social with FREE chips, salsa, and beer!