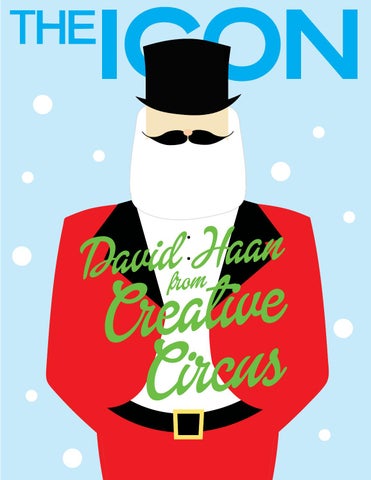 n a a H Davidfrom

Erin Peace has an effortless style and attitude that is impossible not to admire. It may explain her ability to juggle so many commitments, each she performs seemingly without a sweat. She is a dual Journalism and Spanish major, Assistant Director of the Icon, a member of AdWerks, a graphic design intern at the Center for Leadership and Service, in charge of publicity for TEDxUF, and has wrote for the Alligator and Vice. Currently she sees herself doing creative work in her career, making this meeting’s speaker an exciting glimpse into a possible future. “I’m really excited about Creative Circus coming because I want to go there this summer!” says Erin. Erin has done so much for Ad Society and the Icon and we couldn’t thank her enough. Keep up the great work!

The Creative Circus mission is to graduate the best-prepared, most avidly sought-after creatives in the marketing communications industry. With all due respect to your GPA, the fact is, it won’t get you hired in the top creative departments. Portfolios do. Really good ones. Sure, there’s always an exception. That kid whose father knows someone. The talented freak of nature. But for everyone else, The Creative Circus is a great portfolio school to start and an even better place to finish. Because when you do, you’ll be well prepared to get hired at the best agencies in the world, and more importantly excel there. Alumni have gone on to work at Havas, Arnold Worldwide, BBDO, and Huge. You know, all those amazing agencies we saw on the New York City trip. Programs are offered in Art Direction, Design, Copywriting, Photography, Interactive Design, and Interactive Development, along with a shorter Summer at The Circus, an intense eight week course for recent grads and current undergrads. “We’ve pushed aggressively into some pretty unique programs concerning interactive developing and design,” says tonight’s speaker, David Haan, executive director at Creative Circus. “Changes are massive and quick and they’ve caught everybody by surprise.” Luckily with classes offered at The Creative Circus, students can learn to excel at both traditional and digital media. In fact take it from Ad Soc member and Summer at the Circus alum, Noor Ghalib. “This past summer I spent 8 weeks attending the Creative Circus’s Summer At The Circus 2014 in Atlanta, Georgia. There were people from all over the country, including Alabama, Georgia, North Carolina, Illinois, and Tennessee. The courses covered idea development, art direction, Adobe Creative Suite, presenting to clients, photography, typography, board game development, and concepting. It was really challenging to not only be constantly coming up with bigger and better ideas, but to also keep up with the fast pace of the classes. I made some really great portfolio pieces and I also made a lot of great friends. I highly recommend this program to anyone who is wanting to become a creative. The Circus is such a cool environment and the teachers all genuinely want to see you succeed. Even if you’re on the fence about becoming a creative I still recommend going. The knowledge and experience you’ll get from the Circus is invaluable.” Creative Circus: it’s one of the primier portfolio schools in the country and it’s no secret why. Listen up tonight to learn more about past student’s work, if enrolling is right for you, and how to get in.

Twitter Caption Contest! Tweet your best caption for this picture to @UFAdSociety using #captioncontest, and you could win a prize! Winners will be announced at the end of the meeting.

After the Meeting? Itâ&#x20AC;&#x2122;s time to indulge in the cheesiest of holiday cheer. Join us after the meeting at 218 NW 12th Terrace, behind Bagels and Noodles, for our annual Tacky Sweater party for eggnog, games, and carols galore!