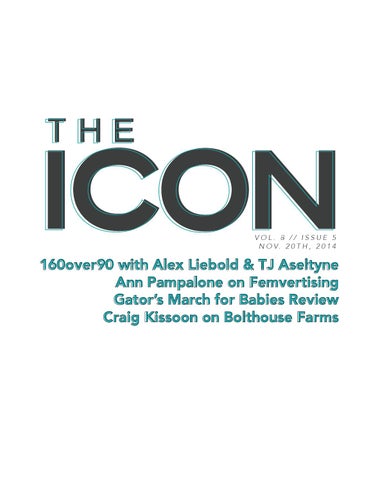 Member Spotlight: Ann Pampalone and her view on femvertising

After coming to UF just last spring once she finished her Associate’s of the Arts degree at Eastern Florida State College, Ann Pampalone has been making a name for herself in class and within Ad Society. She constantly receives the best feedback from real life clients in her classes and is a familiar face at meetings and events. However, it’s Ann’s dedication that landed her the recognition of member spotlight. When asked to write an article about “femvertising,” not even getting hit by a car could stop her. Literally. Even though she’s up in NYC with fellow Ad Soc members, we wanted to honor her for her commitment to not only The Icon, but everything this club does. Here’s the article she wrote while rocking a neckbrace, so be sure to check it out below. Femvertising: What is it? Why should I care? Femvertising is a relatively new movement of pro-female advertising. Frankly, everyone should care about this, because there’s a pretty damn good chance you happen to be or to know someone who is female, and therefore this affects you. Femvertising became a thing in Advertising Week 2014. Many have seen ads like Always’ “Like A Girl” in which we ponder why the heck “#LikeaGirl” (pictured below) would be a bad thing, Under Armour’s “I WILL WHAT I WANT” in which we see that ‘haters gonna hate but do ya thing’ anyway, or Pantene’s “Sorry I’m Not Sorry” in which we think about how much women say sorry all the time out of meekness when they really, really have nothing to be sorry about. The notion of femvertising is quite impressive, in that we want to teach women of all ages and types to embrace who they are, to be proud of themselves, and to do their thing even, especially, in the face of adversity. The one thing that may detract from ‘femvertising’ as we know it is the authenticity of the whole movement. What motivates the creators of these ads to produce these messages? “Brownie points”? Win over the feminists? A valid concern is that the industry plagued with a sexist history is simply pandering to the offended party in an attempt at gaining market share. If someone or some entity is going to advocate for something, they should believe it. This writer, however, thinks we are beginning to see a change. All is not absolutely right in the world just yet, but these are the baby steps we will proudly look at in years to come. It seems like the advertising industry is making a sincere effort to make people reconsider the hurtful slights made in everyday life. The hardest part in effecting change in gender equality, or any type of equality for that matter, is that the majority of offenders don’t even realize they are offending. What is needed is a reminder that we sometimes need to step out of ourselves to see how we affect others. That is precisely why femvertising is a worthy cause in the advertising realm; in teaching awareness about how we might have subtly put down women and how better to approach each other, we re-evaluate all our behavior. Well if this is how I’m treating the other gender, what about people of other races? Other religious beliefs (or non-beliefs)? Other political standpoints? Other sexualities? The beauty of the advertising industry is that the Sixties are over; there are now people of different races and genders and religions and sexualities, making us Ad folks best equipped to be the catalyst for true social change. Maybe femvertising isn’t just about feminism; it’s about all the ‘isms’ (the good ones anyway). It’s about empowerment. Empowering those who have felt underpowered, unappreciated, unloved. Sorry I’m not sorry this article is starting to sound like an episode of Full House, but maybe we need the sweet music in the background while Danny Tanner tells us how great we are. That, or Gisele Bündchen telling us “I WILL WHAT I WANT”. Yeah, let’s go with that. So come on femvertising: lay it on me. What’s next?

with Alex Liebold and TJ Aseltyne

by Erin Peace The glass walls went up, then the brick walls inside the glass walls. Was it a modern restaurant? A dance studio? A cool bar? During construction in 2013, we all waited in anticipation to see what the new cool, glass downtown building would be used for. Pretty soon minimal desks, designers’ chairs, and rows of apple computers sprang up. It was confirmed: Philadelphia-based design firm 160over90 was making its way into town. Today, you can clearly see Associate Creative Directors Alex Liebold and TJ Aseltnye working tirelessly in the downtown fish tank, treating it like a shark tank – their company is known for its efficiency, ingenuity, creativity, and sharp attention to detail. That’s probably why they’ve landed famous accounts like Mercedes-Benz, American Eagle and Nike – and most importantly, the University of Florida.

Caption Contest Commentary Every meeting you can rely on The Icon to find an insane picture for you clever members to create hilarious captions. Howver, tonight we decided to do things a little differently. While there’s still a photo (to the right, obviously), one Icon committee member, Craig Kissoon, reported on the campaign behind the picture. So while you’re thinking of a caption to tweet @UFAdSociety using #captioncontest, make sure to check out his article below. Anyone who grew up watching cartoons and sitcoms in the 90s and early millennium know parents complain about their children not eating their vegetables. Advertisers may have found a solution to their problem. Bolthouse Farms develops bold and colorful products and packaging to entice kids to eat their fruits and vegetables. One of their most popular products include bags of baby carrots called Veggie Snackers. The carrots come with a pouch of chili-lime seasoning you can shake onto them. “They give you that crunch and flavor,” Bolthouse CEO Jeff Dunn said. “You’re going to get that same sensory (experience) you get with salty snacks.” Dunn was a former executive at Coca-Cola. He is credited for creating an action-packed advertising campaign for the carrots. These ads featured a series of adventures and carrots being shot from a cannon. After he left Coca-Cola, Dunn saw potential to increase the demand for healthy snacks using the marketing tactics he learned in the soda industry. Dunn said in an interview with National Public Radio (NPR) his tactics have worked. Sales of fresh carrots have started to grow after a four-year plateau. Dunn has more ideas for the future. He is working with retailers to create new, kid-focused snacking sections in the produce areas of grocery stores. Giant Eagle is installing kid sections in about 200 stores. “When I go into the produce section, there’s not quite as much going on for (kids),” Laura Karet. Karet is the CEO of Giant Eagle. She hopes the new approach will pop for kids.

David Just, a behavioral economist, said he was fascinated by the concept of the kid-friendly snacking stations. Just studies what motivates people to eat better at Cornell University. “(Kids) are much more in the moment,” he said. He added telling kids what to eat is not effective. I was initially skeptical about the efficiency of packaging in promoting a product. I want to believe as a child I would not be swayed by glossy snack wrappers. However, Dunn’s strategies are proving to be efficient and attention grabbing. This story reminds me of a concept I vaguely remember learning about in marketing called form utility. Form utility refers to the process of increasing the attractiveness of a product to a group of consumers by altering its physical appearance, according to the Business Dictionary website. Packaging sends a message about a product or brand. Young consumers want products that are flashy and exciting. Marketing to children is obviously a controversial topic in the industry. However, Bolthouse Farms is not trying to sell children cigarettes. The company is trying to encourage kids to eat their fruits and veggies. Ultimately, the parents have the final purchase power. If the campaign can benefit the children in the long run, then I personally do not see anything wrong with it.