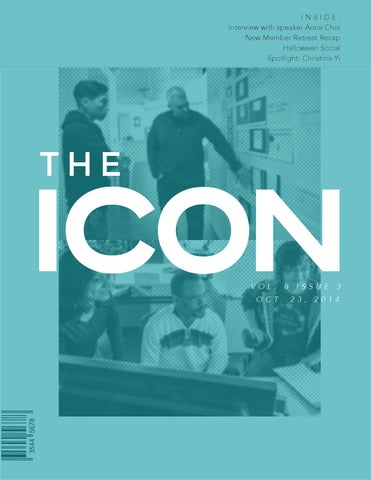 There are always those questions we want to ask during a speaker’s time in Gainesville but somehow don’t have the chance to. Luckily, tonight’s guest speaker, Anna Choi, was able to take the time to let us at The Icon ask a few. What did you go to school for and did you always see yourself in the advertising field? I went to Virginia Tech and studied marketing. We didn’t have an advertising program, so basically freshman, sophomore and junior year we took basic marketing classes - and there were some advertising classes. I definitely knew I didn’t want just a nine to five job, so advertising kind of fell into my lap through my professor, who was amazing. So once I knew that [advertising] was actually a field, I focused my career direction towards it. Can you tell me more about this professor? How did you connect so well with him or her? Dr. Donna Wertalik - I think she was my junior year marketing teacher - she was the craziest, kookiest, most amazing woman. Her class was very different, because we didn’t learn out of a textbook. We did more real life projects and focused on our personal brand, which was a different way to see how we could potentially get a job. She helped us market ourselves, and I think that was the first “Aha!” moment. She and I connected outside of class. She gave me the inside scoop on the next speakers that were coming, who to connect with, past alum, even people in the professional field reaching out to her. I hate to say it’s a teacher’s pet type of thing, but more like a “connection with someone in the field” type of relationship, where she knew my interests because I appreciated the time she gave me. At the same time, I understood that she was probably giving the same contacts to other students expressing their interest. She always told us to do things with our own flair. Don’t go the traditional way. Definitely, that’s so important. Especially because everyone has a personal brand through social media now, whether they realize it or not. That’s sort of where AddThis comes into the picture. Do you find it exciting being in such a new field involving social media sharing? I started off in agency world, which was an amazing experience, but now I’m more in data and social platform technology. It’s so hard to define it because it changes everyday. For instance, we have our weekly statuses report for our whole internal team, and we were just given information that’s helping us explore more business to business partnerships because we have such rich data. It doesn’t have to go through advertising and media, like we’re able to speak direct to CMOs (Chief Marketing Officers) because what we have can be of more value to them than someone doing a campaign. It’s definitely exciting and I think that’s what keeps people in the industry on their toes all the time. It’s not a field you can just read something and understand it, which makes it hard because you guys want experience, but not many people will give you the opportunity to get that. Until you’re in it, you don’t really know what goes on behind the scenes. Facebook could do something crazy one day and it could impact my day-to-day life. Even the creative sizes, when they change, consumers don’t realize that but the people making or serving the ad units, it alters their job. All that makes me think of our own curriculum. I know the college is striving to make those skills a bigger part of what we learn in class, but until then, what can students do to prepare or learn these skills for whatever jobs are out there?

That’s great, but by the time textbooks get a hold of it, it’s a whole different ball park. Who knew Instagram would blow up in a year, and now Vine is irrelevant. This industry overall is at such a high risk, so people don’t even know what they should on their next career step to be, because the next day a giant like Yahoo could buy Tumblr, which happened. Changes like implementing responsive design are so important because there has to be an easy, sleek way to deliver content, or even display the data behind the scenes. I know everyone hates them, but I think group projects are a great way to see what areas you’re most interested in, and outside of class keeping up with the news in the industry, like who’s buying who, which startups are catching up. That’s always good to know because startups are where advertisers and brands have the most opportunity to take a big risk and maybe be the first the industry to execute something.

Wanna read the rest? Make sure to go to ufadsociety.com to get the full interview!

Founded in 2004, AddThis builds tools that impact about 98% of the US population. Through sharing and social media interaction using widgets created by their team, AddThis provides data for creators both big and small, making it easier for them to track the effectness of their content in rich dashboards. Users include big name companys such as ABCNews and Starbucks, but anyone can benefit from their free sharing, following, recommended content, and conversion tools.

Despite only having a meeting every two weeks, Ad Society members have had plenty of events to get involved in. First, Rookies and Gurus had the chance to meet on October 12th at the New Member Retreat, hosted at The Enclave’s beauitful pool. Complete with barbecue, snacks, and the perfect temperature, it gave everyone a chance to relax, especially before a few midterms. Only a week later was the Jungle Friends volunteer session, where members spent a sunny Sunday afternoon getting introduced to some big (and furry) personalites.

“The funniest part was working next to the monkeys and having to keep an eye out because each monkey had its own personality. Some liked to reach out and try to pull your hair or throw things at you,” remembered Zoe Brown. In case you missed the fun, director Brianne Goller is planning to have AdServe return to the monkey sanctuary. “Volunteering at Jungle Friends was so much fun! It was interesting to learn about the different animals they have and to tour the facility. I would definitely recommend this to anyone that is interested in volunteering or just monkeys in general!” says senior Molly Donovan.

Time to get S P O O K Y We hope you have your costume picked out! It’s that time of the year again when we host our Halloween Social. As you can see below, last year was a frightfully good time, so make sure to attend this year’s social on Thursday, October 30th. It’ll be at Cantina in midtown starting at 9 p.m. If you’re struggling to find a mask, we’ve taken the liberty to make two for you, each based on our last events, the New Member Luau and Jungle Friends Volunteering. But if you decide to get creative, you could win the costume contest! Whatever you wear, we can’t wait to see you there!

Professionals flock to AHA Lab not only for fre e f o o d , b u t f o r a c h a n c e t o s h a re t he ir skil ls On October 10th, the Advertising Advisory Council hosted a Q&A panel, catered lunch and breakout session with some of the best advertising professionals and UF alumni around. The event was put together by Dr. Kelleher (“TK”) and our very own Katie Brady - and the feedback has been phenomenal.

The afternoon was jam packed with workshops on topics like personal branding, hosted by UF alum and past Ad Society speaker, Dayana Falcon

“The Advertising Advisory Council has always been a great asset to the program,” she said, “and we couldn’t wait to bring the opportunity back to the students this Fall.” Not only did students learn from panel, but they also had the chance to network with the panelists and get direct feedback on the choices they’re making for the future.

MEMBER SPOTLIGHT: Christina Yi Yes, Christina Yi “woke up like that.” The 19-year-old psychology and advertising sophomore has spent less than three semesters at the University of Florida, but she’s done more than most have in three years – and looked flawless doing it. When she was 10, she was asked to model for a major department store in Korea. She turned down the offer, but people haven’t stopped noticing her personal style: cool and simplistic, her own version of “normal.” That’s why she relates so much to Gap’s current ad campaign, “Dress Normal,” which encourages people to dress however they’d like, in whichever way they think is normal. And soon Christina will be dreaming up inspiring ad campaigns of her own as a new member of UF’s in-house ad agency, AdWerks, in which she hopes to work as either a media planner or account executive on one of this year’s accounts. Christina is an active member of the service sorority Delta Nu Zeta and serves as the Design Chair for Employer Relations for the Career Resource Center. She’s also the online photographer for Sparks Magazine, UF’s leading Asian-American publication. She recently joined both the Vietnamese Student Organization and Filipino Student Association in order to get in touch with her cultural roots. But Christina never forgets to make time for Ad Society, and that’s why we love her. Asked to pick between her two majors, advertising always wins out. Your dedication shows, Christina. Keep up the good work!

CAPTION CONTEST Tweet your best caption for this picture to @UFAdSociety with #captioncontest and you could win a prize! Winners will be announced at the end of the meeting.

After-Meeting Social at Tijuana Flats. Join us for a few rounds of FREE beer, chips & salsa!