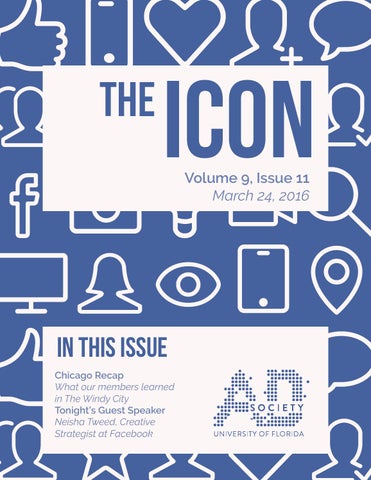 In this Issue Chicago Recap What our members learned in The Windy City Tonightâ&#x20AC;&#x2122;s Guest Speaker Neisha Tweed, Creative Strategist at Facebook

What was the best part of the Chicago trip? Did you have a favorite agency? The best part of the Chicago trip was finally getting to know some of my fellow Ad Society members. My favorite agency was Golin! What area of advertising do you hope to pursue? I am leaning towards accounts or strategy, but I am not entirely sure as of now. Do you have any kind of motto or life advice that you live by? A quote that I try my best to live by is “Always do what is right. It will gratify half of mankind and astound the other.’

Keep up the awesome Where do you hope a career in advertising will take you? What are work, Pablo! We your biggest goals? love recognizing our Many of the agencies we visited said that no two days are the same in the advertising industry. That’s one of the things that stood out to outstanding members. me throughout the trip. So all I can hope for is an unpredictable and If you know someone who deserves a interesting life in the future. As of now, my biggest goal is to leave UF feeling that I have done all I can to prepare myself for a successful spotlight, email career and enjoyable life. mmundo@ufl.edu.

Ad Soc Takes Chicago: A RECAP Ad Society’s trip to Chicago could best be described as an informative vacation. The food in Chicago was delicious, with Ad Society stopping by a new donut place every day. Sightseeing took us from Cloud Gate in Millennial Park to the rooftop lounge in Willis Tower. Ad Society came ready to represent, asking great questions and making good impressions on every agency we visited. Ad Society toured: • Edelman - An established PR agency where a panel of young employees talked to us about their post-college experiences. • Leo Burnett - One of the most famous agencies in the world with clients that include McDonald’s, Nintendo, and Coca-Cola. • Grip - A small agency with big talent that produces awesome creative work. • Golin - A hip agency with a unique internal structure known as the G4 model. Look into their “un-ternship” for a different kind of summer internship experience. • McGarryBowen - A more traditional advertising agency that’s worked with brands like Disney and Kelloggs.

Join us on our trips next year. You won’t regret it.

tonight’s Guest Speaker Neisha tweed Creative Strategist Neisha is a compulsive problem solver, unrelenting challenge-seeker and recovering perfectionist, which works out well for her in and out of the office. By day, she is a Creative Strategist at Facebook, working with global brands and advertising agencies. She is a skilled communicator, creative director, and writer, constantly pushing herself and others to be amazing. This perspective spills over into her passions for mentorship and diversity and inclusion in the advertising and tech industries. With nearly a decade of experience working on integrated campaigns for multicultural and general market clients, Neisha has received several surprisingly heavy awards for her creativity and community involvement. Somewhere between work, blogging, speaking engagements, coffee dates with young creatives, and watching SVU reruns, Neisha manages to fit in as much traveling and cheese plates as possible.

Some Cool Facts about Neisha • She is an alumni from UF and the Creative Circus • She has interned with SED International, BBDO NY, FCB Chicago and BBDO ATL • She has worked at Toy, Ogilvy, GlobalHue, Publicis, McGarryBowen and Facebook • She helps out aspiring creatives with thoughts and advice on her blog, babyfoodforcreatives.com

CAPTION CONTEST Tweet your best caption for this picture to

@UFAdSociety and include #captioncontest and you could win a prize!

The squad, just after landing in Chicago