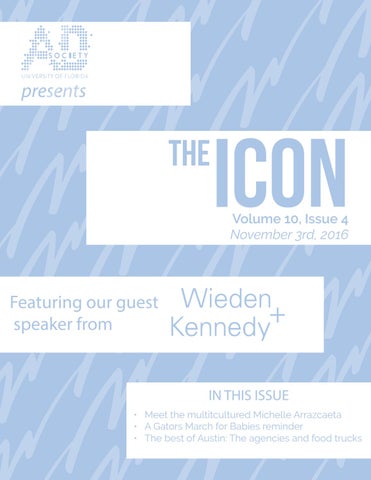 Featuring our guest speaker from

IN THIS ISSUE • Meet the multitcultured Michelle Arrazcaeta • A Gators March for Babies reminder • The best of Austin: The agencies and food trucks

A Gators March for Babies Reminder!

We are still collecting for Gators March for Babies on November 20th! To register with the Advertising Society team, go online to http:// www.gatorsmarchforbabies.org/. We’re hoping to break some Ad Soc records this year. And don’t forget, it’s a committee competition!

Get into the mind of American art director, designer and author George Lois, who offers lessons, facts, anecdotes and inspiration for success. A great read for anyone interested in business and creativity, this one won’t be a disappointment.

Tyler grew up in a small town in Arizona and moved to Florida after he graduated high school. He is an advertising major and loves working with computers and designing things. In his free time he enjoys playing racquetball, hiking, and rock climbing. Being a transfer student, what sparked you to so quickly get involved with Ad Society? I was always very involved in clubs during high school, but there weren’t many club opportunities when I first got to college. When I transferred to UF I knew that there had to be a few that would be a good fit for me. I went to the J-School involvement day and after meeting all the clubs, I knew that AdSociety was somewhere where I could meet some great people and leave my mark. What area of the industry calls out to you most? Graphic design! I have loved working on graphics since I was a freshman in high school and I even started my own website and graphic design business that I've run as a hobby. It gives me the opportunity to improve my design skills by working with actual clients. If you could only work with one client/agency for your career, which would you pick & why? I enjoyed visiting McGarrah Jessee when we went to Austin, but I don’t see myself keeping a career at an agency. I have always been more of an entrepreneur and I would like to start my own agency after I get some experience in the industry.

Tonight’s Guest Speaker About the agency If you’ve seen ads from Nike, Coca-Cola, Old Spice or Procter & Gamble anytime recently, you’ve seen work from Wieden + Kennedy. Known for being one of the largest independent creative agencies, W+K prides itself on its focus on good ideas. Portlandia fans take note: It is headquarted out of the outdoorsy city of Portland. The agency also has offices across the globe, including spaces in London, Amsterdam and Tokyo, just to name a few.

Tonight’s Guest Speaker Michelle Arrazcaeta Michelle is a Senior Strategist at Wieden + Kennedy Portland. For the past year, she dove into the financial world working on TurboTax. Before that, she worked on Nike in three offices (Portland, Amsterdam and Delhi) over the course of three years. At the agency, she's known for always traveling.

Each of W+K’s offices has its own unique style and personality.

Austin Recap On Ad Society's trip to Austin, Texas we visited Proof, Preacher, McGarrah-Jessee, The Butler Bros., and GSD&M. We ate delicious food and learned a lot about the culture of smaller agencies where team members can get their hands on work from other disciplines. Each agency had something to teach us but a few of the lessons were recurring. Always be nice in the advertising industry, don't burn any bridges. Putting yourself in uncomfortable situations helps you grow as a professional. Lastly, never be afraid to ask good questions. We snagged a few quotes from members who enjoyed their time on the trip.

“As a new member who didn’t know anyone, I wasn’t sure about going on the Austin trip, but I could not have asked for a better way to start off my school year. Visiting the agencies not only exposed me to amazingly creative people and a behind-the-scenes look at agency life, but it also helped me build a strong passion and clear goals. Getting to know Austin with fellow Ad Society members was also a big plus. Also, shout-out to food truck tacos.” -Julian Pinilla Missed the Austin experience? Don’t sweat it—we’ve got another trip coming up in Spring!

“The city of Austin was so unique -- you could tell in the way people dressed and acted, the murals, and the atmosphere that everyone and everything had its own sense of style. It was a perfect combination of southern charm and artsy. The food trucks were also a huge bonus!” -Alana Saavedra

Tweet your best caption for this picture to @UF AdSociety and include #captioncontest and you could win a prize!